Top
The Assyrian Dalek - In this episode we'll take a look at the explorer Sir Austen Henry Layard and the so-called Assyrian Dalek. 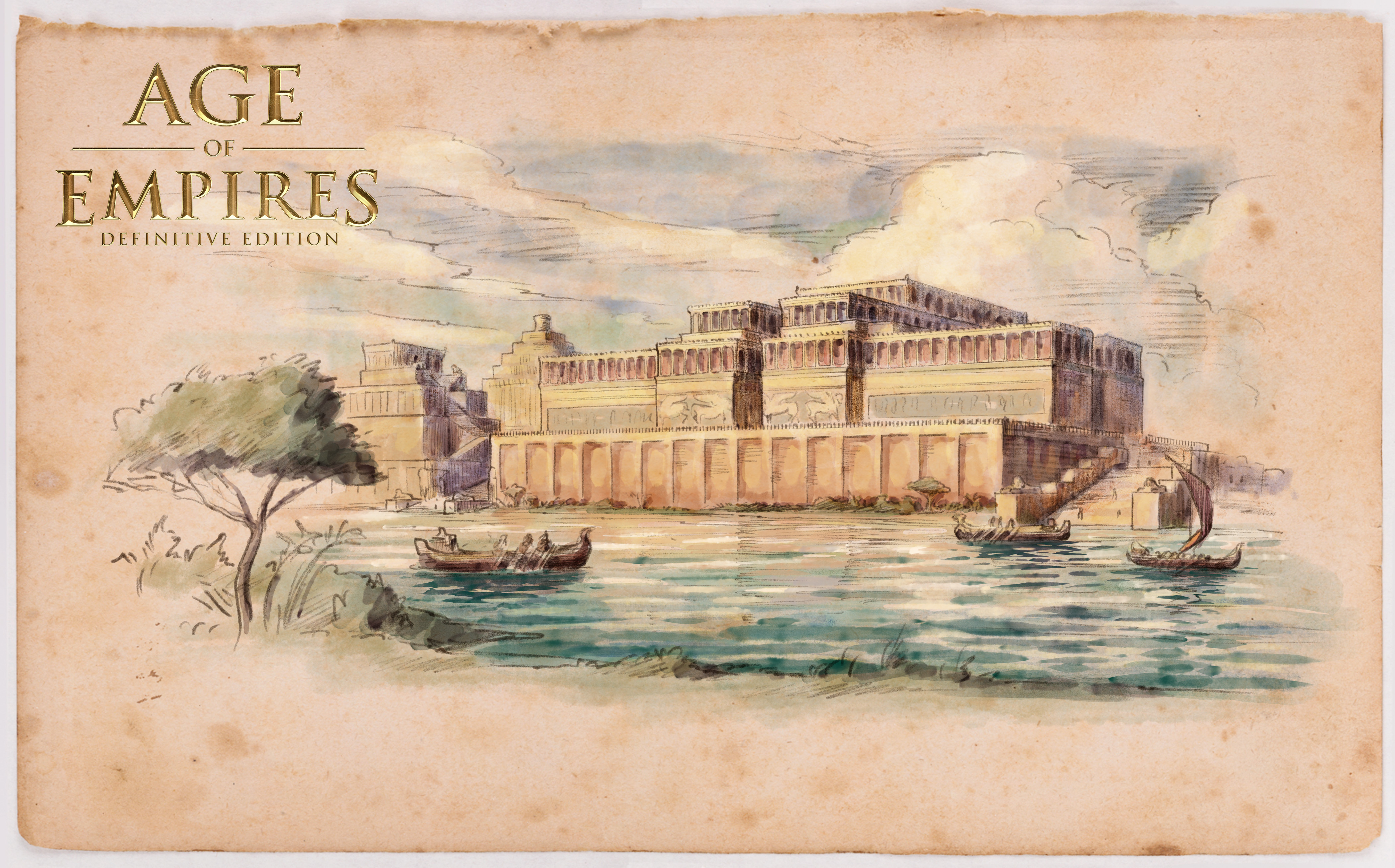 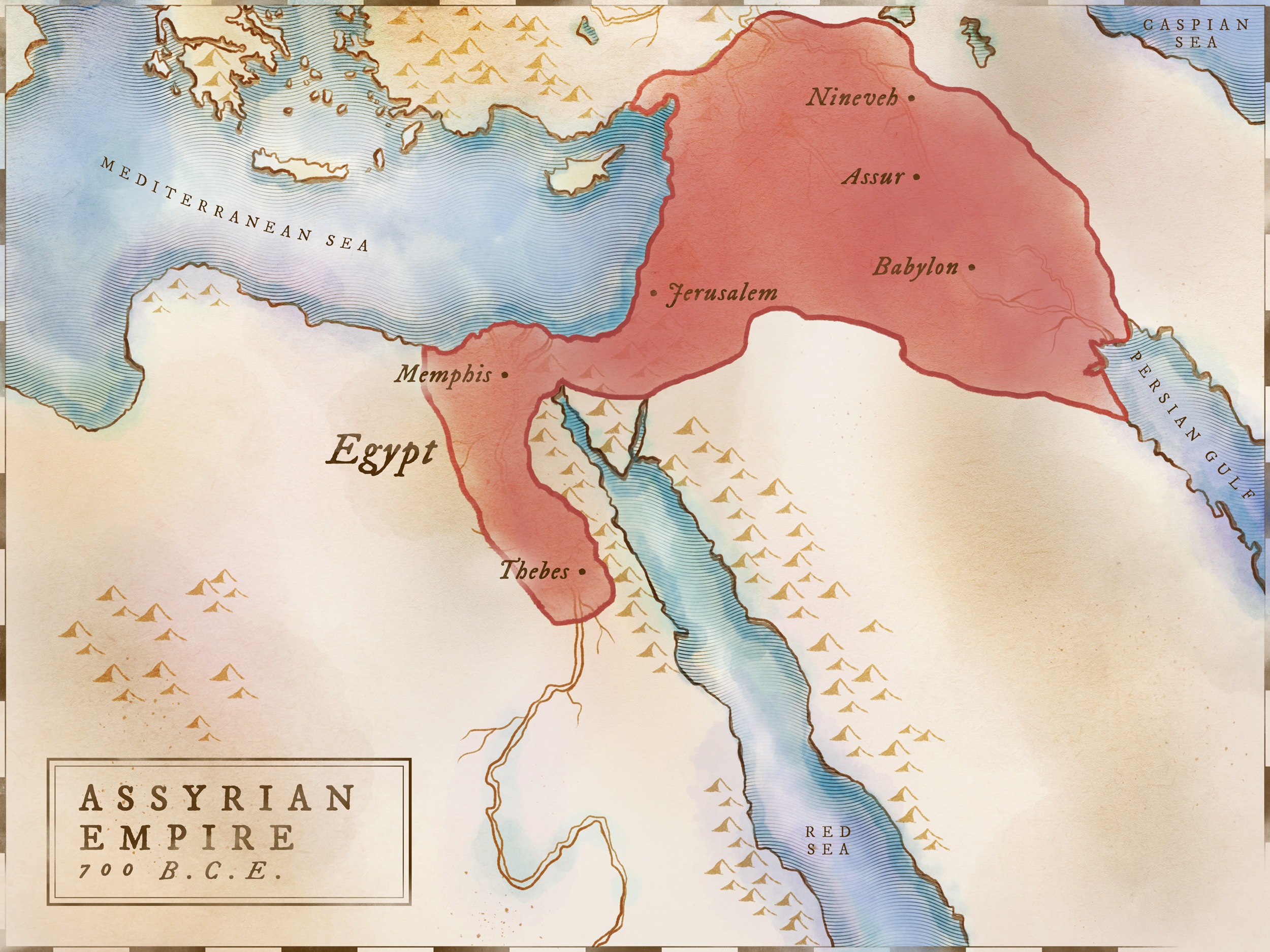 Assyrian Empire
The Assyrian Empire began in northern Mesopotamia (modern-day Iraq) along the Tigris River, and spread as far as Egypt. The original Assyrian kingdom was settled after the city of Sumer was founded to the south; and was dominated by the Sumerians both culturally and politically during its early history. 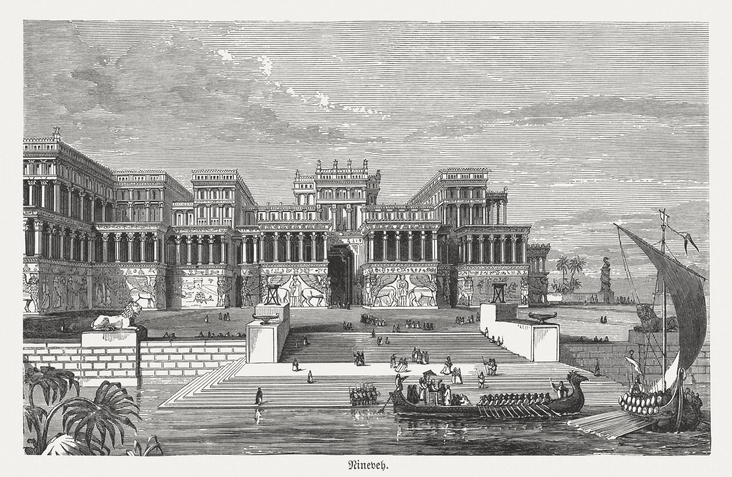 Wood engraving, published in 1886 CE, of the Royal Palace of Nineveh, c. 7th century BCE
The capital of Assyria was Assur for most of its existence but moved to other sites when kings built new palaces. Other important cities and capitals in the Assyrian homeland were Nineveh, Arbela, Khorsabad, and Nimrud. 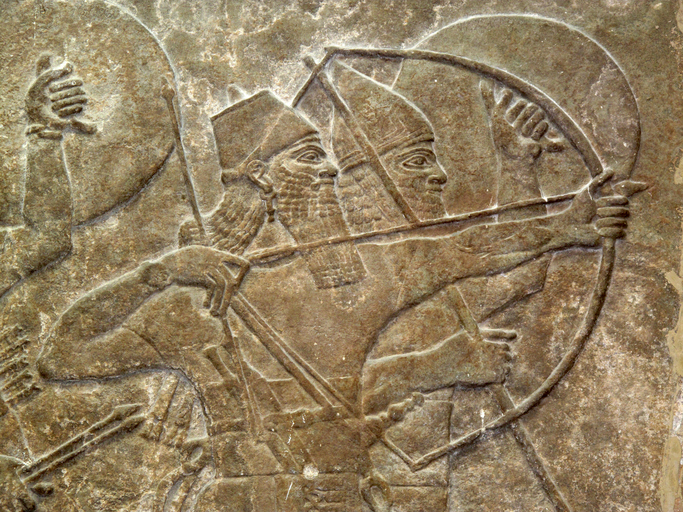 Assyrian relief (8th cent. BCE) showing warriors in battle
Around 2000 BCE, a Semitic people called the Amorites invaded Assyria. By 1800 BCE, an Amorite king of the Assyrians had established control over most of northern Mesopotamia. Their power was short-lived in this period, however, due first to the rise of Babylonia under Hammurabi and later to the ascendancy of the Mitanni in modern Syria. The Middle Assyrian Empire dominated the region from 1363 to 1000 BCE. Several strong kings first reasserted Assyrian independence and then began encroaching on neighboring empires.

Illustration of various Assyrian warriors
The Assyrians avoided destruction during the Bronze Age catastrophe of 1200 BCE when several major civilizations (including the Mycenaeans and Hittites) collapsed, perhaps because the Assyrians were already embracing the new military tactics and weapons that the older kingdoms were not. In fact, during the political vacuum created by that dramatic collapse of powers, the Assyrians prospered. By 1076 BCE, Tiglath Pileser I had reached the Mediterranean to the west. The New Assyrian Empire (1000-600 BCE) was the peak of their conquests. Their empire stretched from the head of the Persian Gulf and around the Fertile Crescent through Damascus, Phoenicia, Palestine, and into Egypt as far south as Thebes. Their northwestern border was the Taurus Mountains of modern Turkey. 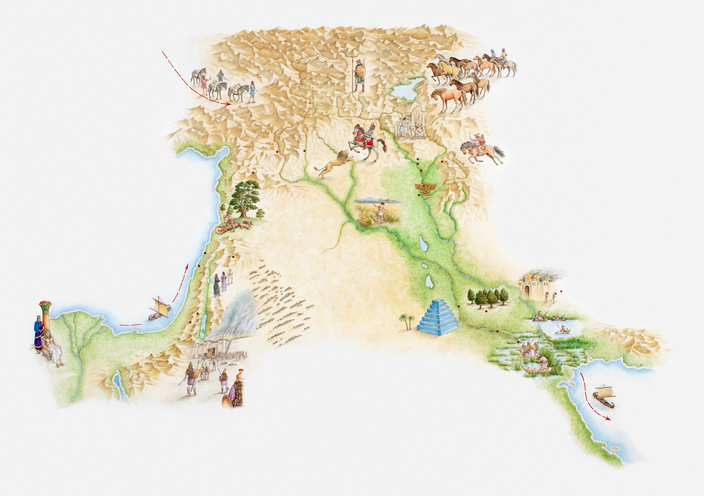 Illustrated map of the ancient Assyrian empire
The Assyrian economy was based on agriculture and herding, but the Assyrians also benefited from being situated astride some important trade routes. They are not remembered as traders themselves, but as tax collectors getting rich on merchants passing through their territories. During the New Empire period, they profited from the taxes and tribute that they collected from their various provinces and vassal states, including even Egypt for a few years. 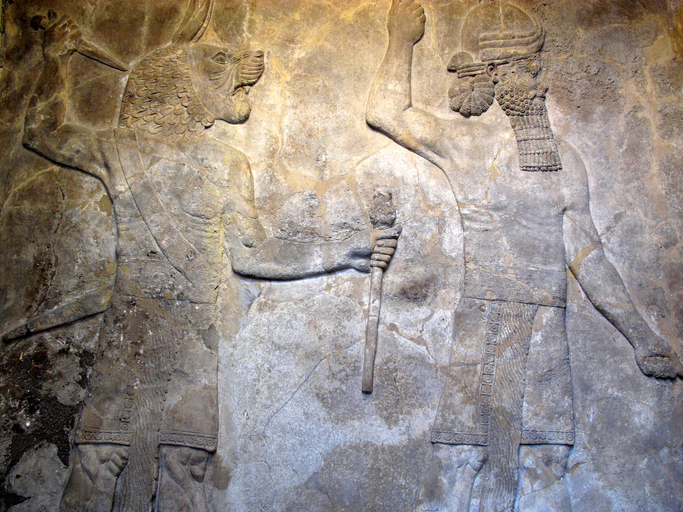 Assyrian relief (c.700-692 BCE) from the Nineveh Palace showing a pair of protective spirits
The Assyrian religion was heavily influenced by that of its Mesopotamian predecessors—mainly the Sumerian culture. The chief god of the Assyrians was Ashur, from whom both their culture and capital derive their names. Their temples were large ziggurats built of mud bricks, like those of their neighbors to the south. 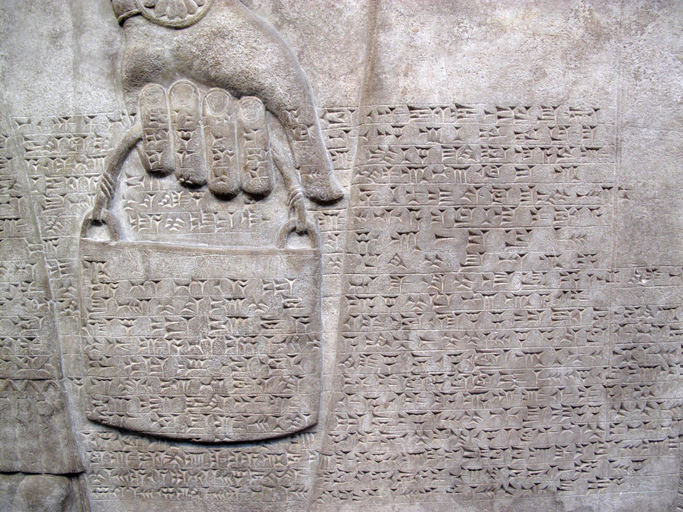 Assyrian relief (c. 865-860 BCE) with cuneiform script, and depiction of a royal helper carrying a bucket
The principal activity of the rich was hunting from chariots—a pastime appropriate for such a warlike culture. Despite their fearsome reputation, the Assyrians embraced civilization. They wrote using cuneiform and decorated their cities liberally with reliefs, painted stonework, and sculpture. 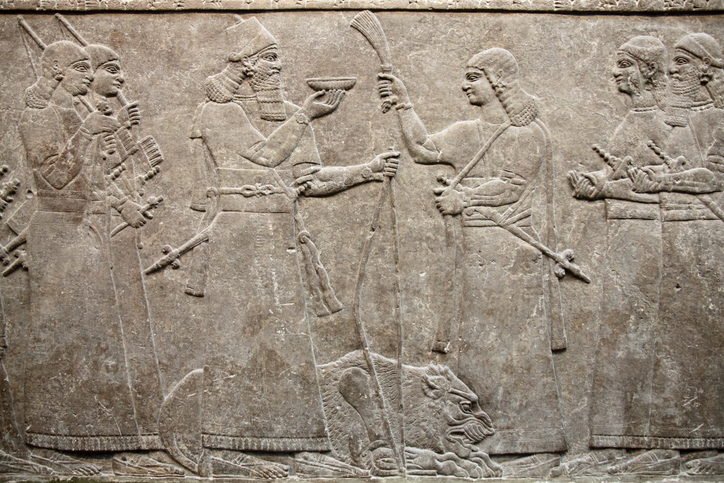 Assyrian relief (c. 865-860 BCE) from Nimrud showing King Ashurnasirpal accompanied by his courtiers pouring a libation over a dead lion
The king was the head administrator of government, supported by local provincial governors. The palace was the seat of administration. Advisors consulted the omens before important decisions were made. Provinces and vassal cities were required to pay taxes and tribute in the form of food, goods, gold, labor, military supplies, and soldiers for the army. An extensive network of roads and grain depots were built during the New Empire to speed communication and armies moving to troubled locations. 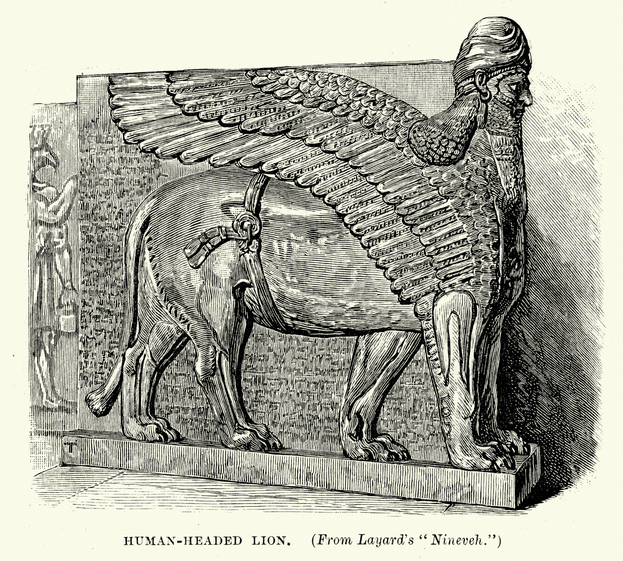 Vintage engraving of an ancient Assyrian Human-Headed Lion (Lamassu) from Nineveh
The Assyrians built on a large and lavish scale, using mostly mud bricks, but also stone that was more readily available in their region than it was farther south. Several New Empire kings built extensive palaces and decorated them with the booty of war and the tribute of vassal states. 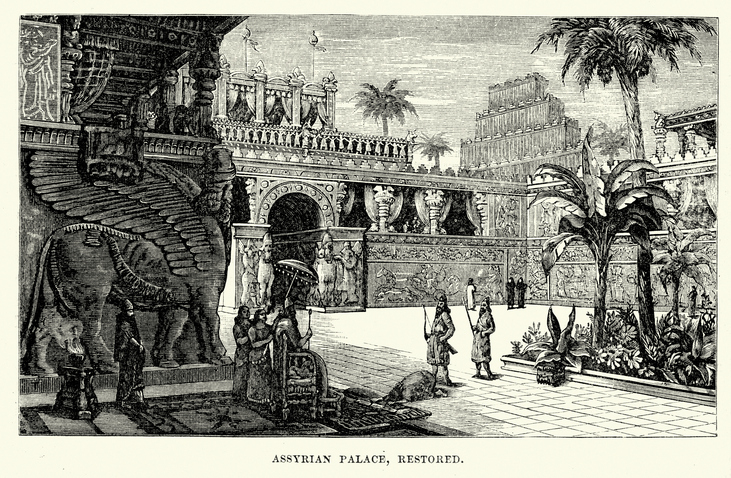 Vintage engraving of an Ancient Assyrian Palace
Palaces were adorned with painted stone reliefs, extensive gardens, and man-made streams. A common fixture was the lamassu—a winged hybrid creature, part bull and part man. These lamassu stood as guardian sentinels on either side of gateways into citadels; and were akin to sphinx-like door guardians excavated at the Hittite capital of Hattusa (in Turkey). 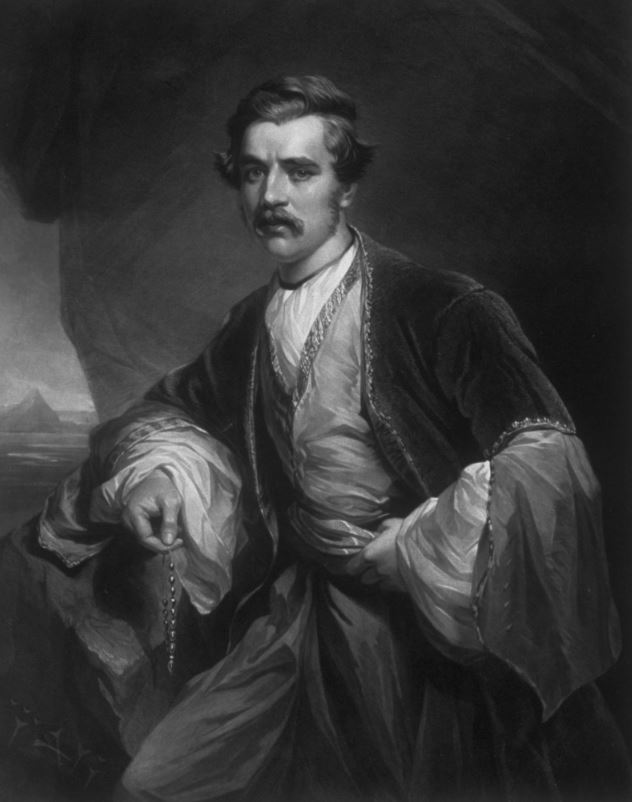 Engraving of Austen Henry Layard in Persian costume, c. 1848 CE
Two of the most remarkable discoveries of ancient Assyrian citadels were made by Englishman Sir Austen Henry Layard (born 1817 CE). Layard was an archaeologist, adventurer and cuneiform scholar who uncovered many priceless and important artifacts during excavations he conducted in the mid-1800s. In the ruins of Nimrud, he found alabaster reliefs depicting military campaigns and scenes from courtly life; and in Nineveh he unearthed thousands of cuneiform-inscribed clay tablets (dubbed The Royal Library of Ashurbanipal). 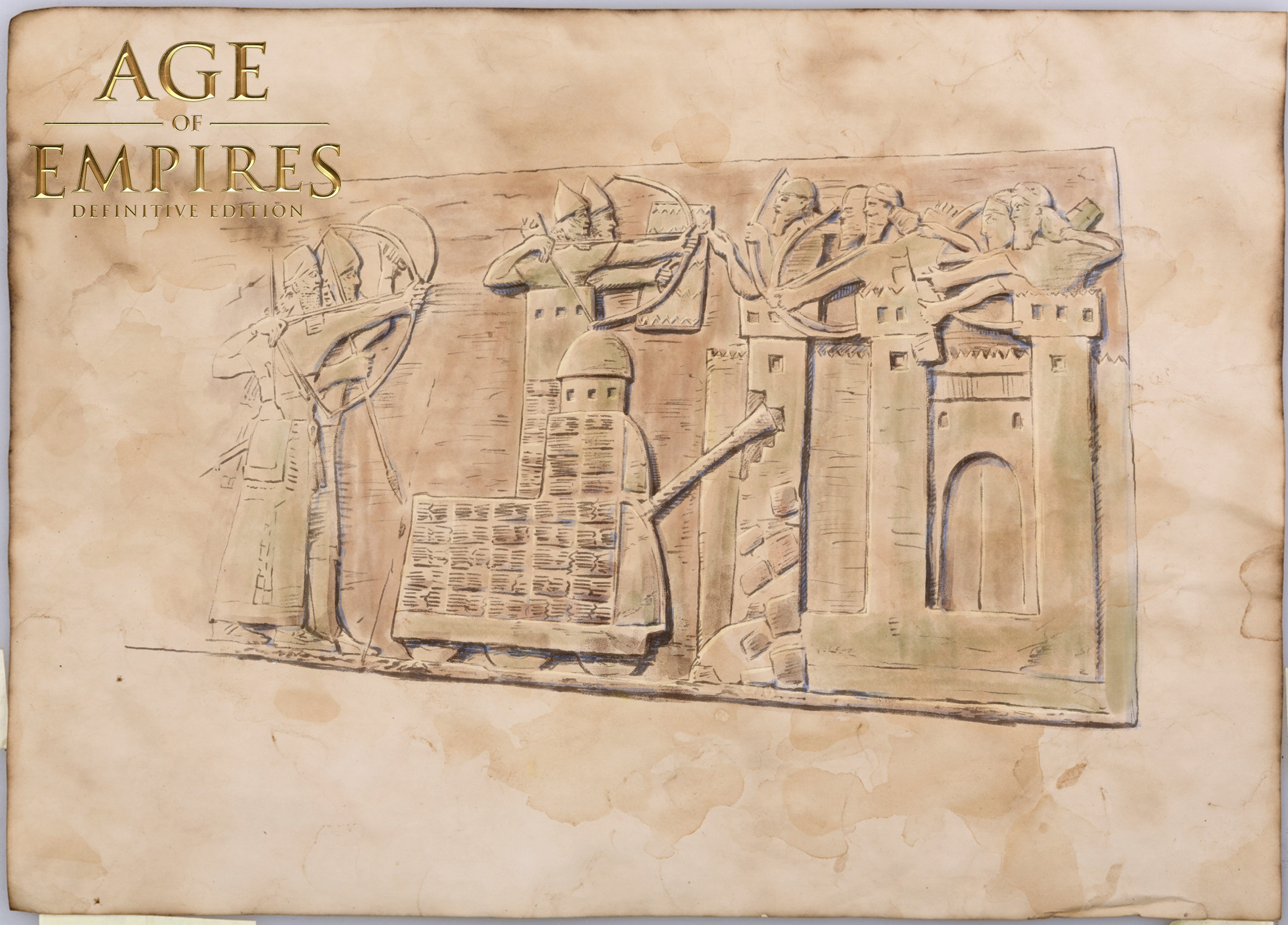 The Assyrian Dalek
The famous Lachish reliefs are carved stone panels discovered in Nineveh (in present-day Iraq) in 1845-7 CE by 28-year-old adventurer…Read more...
The famous Lachish reliefs are carved stone panels discovered in Nineveh (in present-day Iraq) in 1845-7 CE by 28-year-old adventurer and archaeologist Austen Henry Layard, a 19th century version of Indiana Jones. The scenes depicted in the reliefs show the wartime exploits of King Sennacherib against the Jewish citadel of Lachish. They were carved around the year 700 BCE to decorate his palace. Twenty miles south of Nineveh, Layard helped excavate another Assyrian royal domain in Kalhu (also known as Nimrud). Here was unearthed a set of panels showing violent battles from an earlier era. One of these images depicts a bizarre siege engine that has come to be referred to by laymen as the Assyrian Dalek because of its resemblance to the villainous aliens from Dr. Who. Depicted as smaller than actual scale by the artisans who created it, the siege engine would have been over 20-feet-tall with fireproof plates and an iron ram. The Assyrian Dalek relief is in the collection of the British Museum (London).
The first Assyrian armies were peasant spearmen. Following a series of military reforms around 800 BCE, however, they employed a standing army of conscripts and professionals. This force was better armed, armored, and supplied than the armies of most of its enemies, giving it important advantages. The New Empire armies benefited from cheap iron used for improved swords and armor. The Assyrians were among the first to adopt the concept of the integrated army made up of an infantry core for shock, supported by light missile troops and a mobile wing of chariots, camelry, and cavalry. 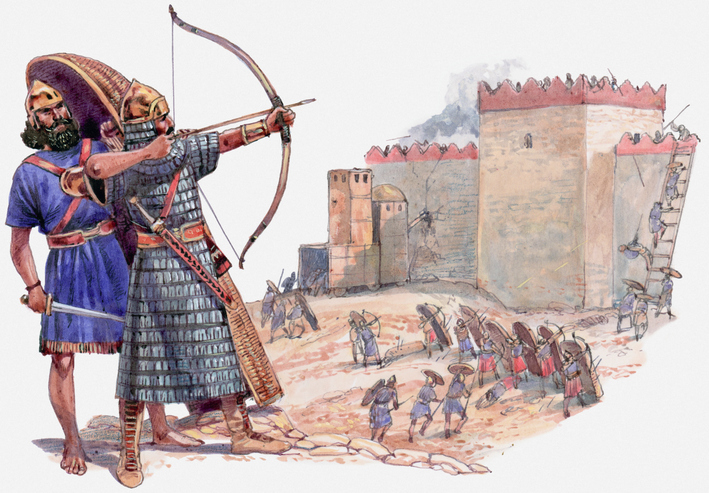 Illustration of the Assyrian army attacking Jerusalem
The army was capable of fighting on the plains where chariots and then cavalry were critical, as well as in rough terrain where horses and chariots had little use. They campaigned regularly to the north and east against any neighbor that posed a threat. For many years, the elite of the army were the charioteers, followed by the cavalry after chariots became obsolete. The Assyrians were accomplished at the art of capturing walled cities. Their historical records recount numerous city assaults and the brutality that followed. Citadels that did not submit were often wiped out, their inhabitants either killed or sent to another corner of the empire to live out their miserable lives as abject slaves.

Antique engraving based on a carving of an Assyrian military scene
The brutal policies of subjugation and exorbitant demands for tribute and taxes made the Assyrians unpopular masters. Despite the ferocity of their reprisals, vassal states continually revolted when given an opportunity. Weaker Assyrian kings were unable to hold the empire together in the face of internal and external pressure. In 612 BCE, the capital at Nineveh fell to a coalition of Babylonians and Medes. The Babylonians were in revolt (Babylon had been sacked in 648 BCE) and the Medes (from modern western Iran) were seeking retribution for past Assyrian invasions of their lands. The last Assyrian army was defeated soon thereafter by the same coalition, and the Assyrians as a separate culture disappeared from the world’s stage. 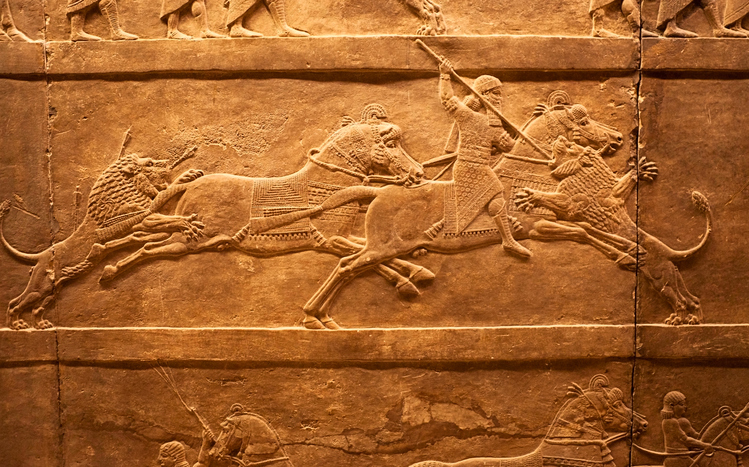 Ancient relief from Nineveh Palace (c. 645 BCE) of a Lion Hunt
The Assyrians are remembered from their boastful inscriptions and Biblical references as ferocious warriors. Whether they were significantly more brutal than was normal for the time is unclear. For several centuries, however, they were the greatest military power in the civilized world. Their armies were innovative, and they appear to have been among the first to use large bodies of cavalry effectively. They certainly influenced the Persian armies that followed them. They are not remembered for any significant advances in technology, philosophy, the arts, or science. Their cities have been hidden under piles of rubble for thousands of years, and archaeological ventures have not yielded fabulous treasures that can compare with those of several other ancient cultures. We can only hope that archaeologists can continue to search for Assyrian relics and discover more about this ancient civilization. 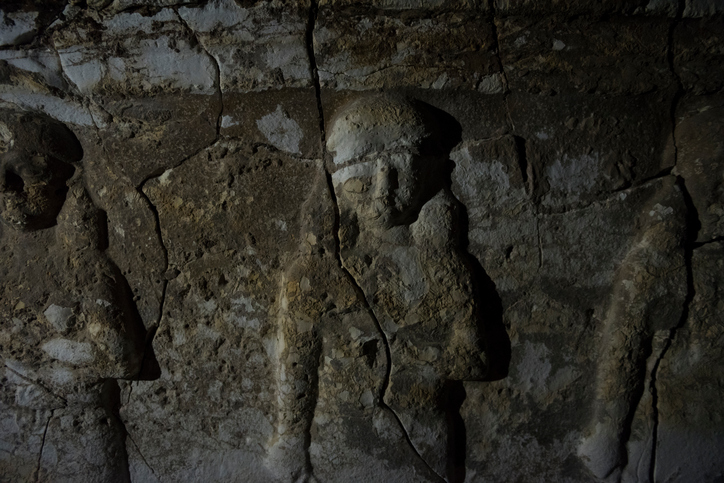 An Assyrian stone sculpture under the Nabi Yunus shrine in Mosul, Iraq
In 2014 CE, extremists in Iraq blew up a shrine sitting on top of Assyrian ruins in Mosul. When Coalition forces took back the city two years later, they discovered that looters had dug tunnels in search of relics to sell on the black market. Archaeologists were amazed to find that the antiquities thieves had inadvertently uncovered Assyrian relics from a buried palace, including stone reliefs, a massive stone bull, and a carving depicting a demi-goddess showering humans with “the water of life.”