September is already set to be an amazing of a month for Age of Empires. There’s plenty for everyone, whether you’re a competitor or a spectator! We’re not only celebrating upcoming tournaments and champions, but our community’s efforts across multiple charity events as well. We couldn’t be more proud of the Age of Empires community and this past month highlights exactly why!

With August now behind us, the month ahead looks to be a big one for the Age of Empires Community. There are sign-ups for tournaments of all skill levels where you can choose to get involved, or appreciate as a spectator!

Below, you will find a list of details, sign-ups, brackets, and schedules where you can tune in to all the action; we hope you’re ready for another exciting month!

King of the Desert #3

King of the Desert — hosted by MembTV — is back for its third edition! With a mesmerizing $50,000 prize pool the best of the best will compete over a six week period, starting from September 14th through to October 25th.

King of the Desert is a community favorite tournament that brings out the world’s best players to compete on a single map: Arabia. In the previous installments, King of the Desert has been purely single-elimination. This year, however, it will use the GSL style format. All games from the group stage and onwards will be streamed live –  expect to be sitting at the edge of your seat experiencing the best Age of Empires II: Definitive Edition around.

Sign-ups are open until September 6th. The 64 highest rated signs up will then compete for the title of King of the Desert. 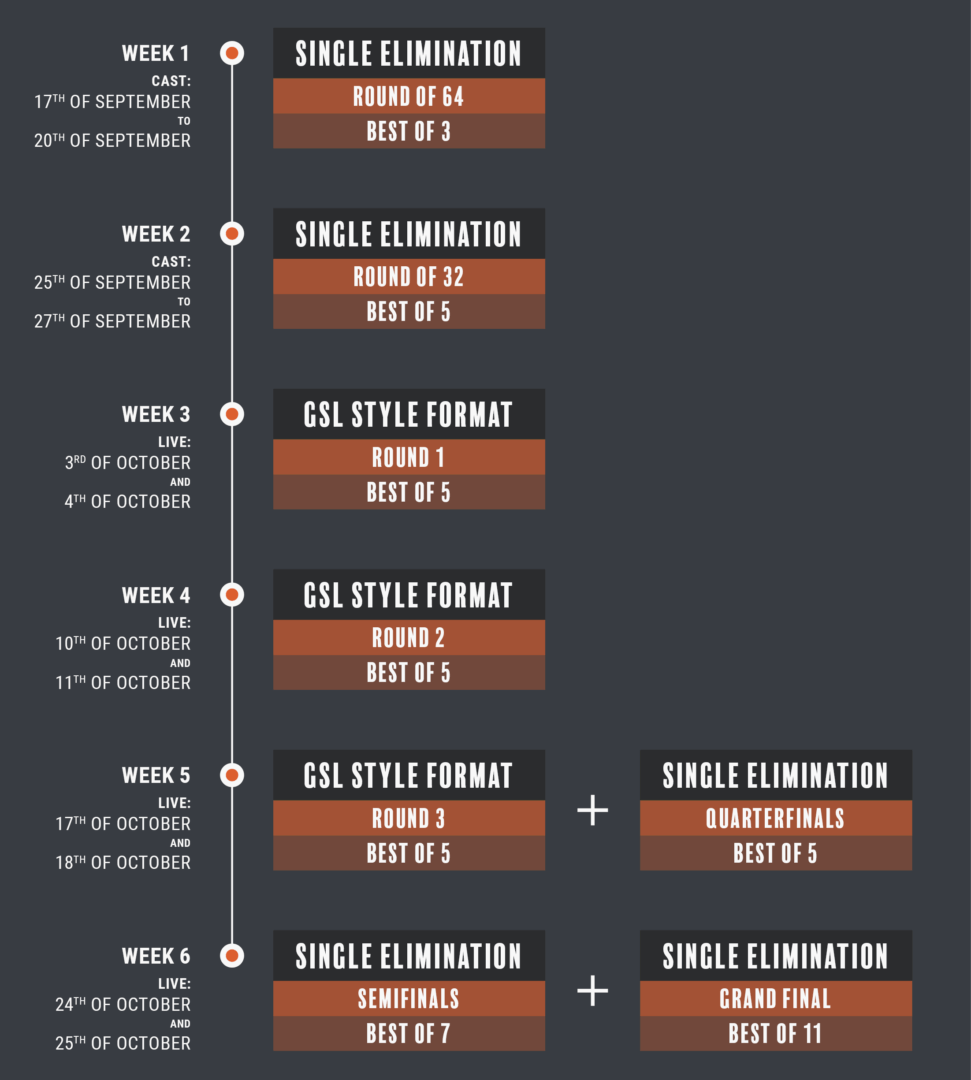 Empire Wars Duo —hosted by LidaKor — is a 2v2 Empire Wars tournament filling the gap between Red Bull Wololo 2 and King of the Desert. The tournament is the first of its kind, exploring in 2v2s the possibility of further Empire Wars team games. Empire Wars Duo is featuring a $1000+ prize pool and a 16-team main event — including a Silver League!

The top 8 teams will be automatically added to the main event, while 16 others will compete in the qualifiers for the 8 remaining spots in the main event. The Silver League is a fantastic place to test your skills and get involved in the competitive scene, good luck to all those who signed up!

Wars of Liberty Jamboree — hosted by the Wars of Liberty team— is played on The Wars of Liberty mod for Age of Empires III, adding over 40 new civilizations and 60+ new maps! Their team recently announced the tournament would be back for its 3rd edition, and its imminent return is coming soon. Make sure to tune in!

Debbie is working hard this month continuing the amazing charity events we’ve seen from the Age of Empires community. She has organized a series of events to help Pfotenhilfe Sauerland, a German Dog Protecting Organisation.

“We will be fundraising money for the Dog Protecting Organization “Pfotenhilfe Sauerland”. I have been an active part of this organization since 2014, where we help provide foster homes. Of course, Justus, our beloved AoE Doggie, is from there too. The dogs need food, straw, blankets, and doghouses to get through the winter. It’s a German Organisation helping in Hungary.” – Debbie

The event promises to be a great entertainment spectacle while also contributing to those in need.

Eagle Scout Cup — hosted by Cbass — brings a new mixture to the competitive scene; a co-op tournament! You and one friend will get to share a civ and, through exceptional teamwork, coordinate a good economy and solid army control to try and move up into the next round! Have you ever wondered how the competitive scene stacked up but was too afraid to try it out yourself? Can you balance your economy but have bad army control, or is your unit control so good one mangonel can destroy your opponent while your economy falls apart? Well, here’s your chance to do it all! In the Eagle Scout Cup, will we see two low elo players pull together and win it all? Stay tuned and find out as sign-ups start September 1st! There will be a prize pool, special prizes, mini-games, and more!

The Feudal Age Cup — hosted by In Season e-Sports — is the second in a series of Age of Empires II: Definitive Edition tournaments. This is the next step forward after the Dark Age Cup, which completed its finals last month. It’s designed for intermediate players and will be held in a format chosen by said participants, with an increased base prize pool of $75. As a growing, friendly community, it’s a great way to get involved in the competitive scene.

Registrations for the Feudal Age Cup will open in the first week of September. Join the official Discord channel to become a part of a growing community of players, streamers, and casters with a shared love for the game!

The Crystal Cup—hosted by ShadowCrystall and ZeroZabias—is a single-elimination, 1v1 tournament designed to highlight up-and-coming players between 1200-1700 Elo. The tournament is offering a combined prize pool of $150 between the runner-ups and winners of each bracket.

The Ayre Age League: Season One — hosted by Jasent — continues into the month of September! Competing players have now advanced through the qualifications stage and entered the swiss stage, which will run until September 5th. On completion of the swiss stage, the playoffs will be on September 11th, including a double-elimination bracket. The unique map drafting system has made for some interesting matches and strategies so far, we can’t wait to see what the playoffs bring!

August was a great month for the Age of Empires community. Numerous tournaments concluded their final stages and charity events kicked major goals supporting those in need!

Like a fine wine, the Red Bull Wololo is only improving with age! In its second edition, we saw some huge upsets in the main event and matches that easily qualify for “match of the year”. The fast-paced Empire Wars game mode has once again entertained a huge crowd over the four-day main event. The open qualifiers resulted in some fantastic and unexpected players earning themselves a spot into the competition.

After an amazing series, Liereyy again pulled out all the stops to narrowly claim a victory over Hera in a 4-3 victory that went down to the wire! Congratulations to Liereyy and team Aftermath for their performance across the entire tournament.

Leveling Up for Sick Kids with LilTrouble__

This month LilTrouble and fellow Age of Empires II enthusiasts joined the #14forStarlight Fundraising Campaign! Between the 13th and 30th of August; a range of Age of Empires II-themed events raised funds for the Starlight Children’s Foundation Australia. The event provided some of the most entertaining matches of the year as viewers were able to bid on sabotages for the competing players; such as deleting villagers and forcing idle time.

To look into how Starlight is brightening the lives of seriously ill children and their families, head to www.starlight.org.au

The Stay-At-Home Cup — hosted by the ESOC team — is an Age of Empires III charity event which sees all proceeds from Twitch subs & bits go towards COVID-19 relief funds. This unique event allows players to pick their home maps, forcing their opponents to play on unfamiliar territory. With a $750 prize pool, you can be sure every player will be bringing their A-game! 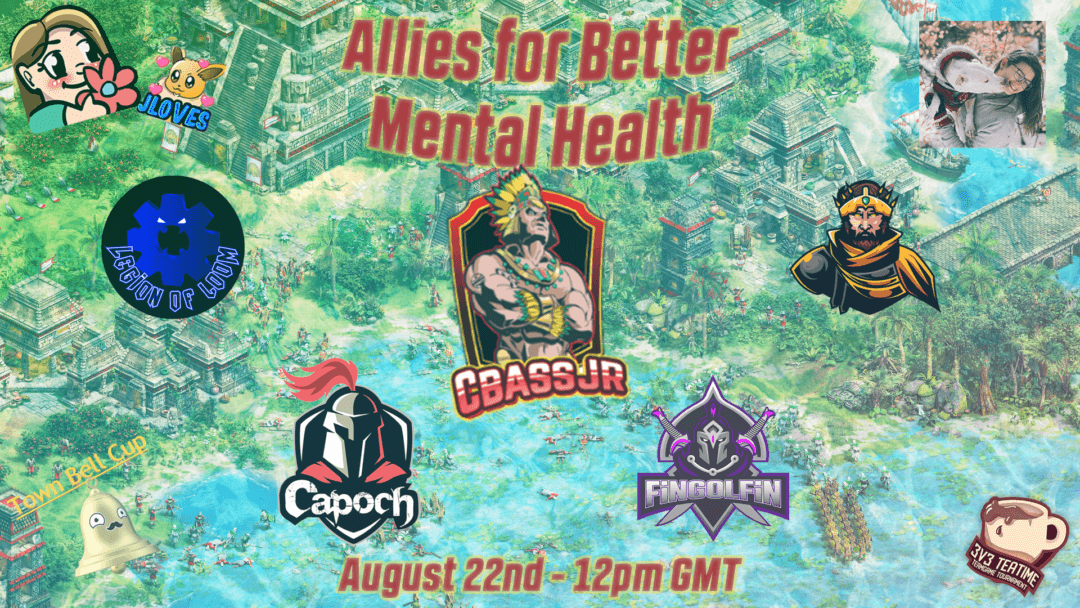 The issues surrounding mental health, depression, and anxiety have been close to our hearts for a long time, and since the outbreak of COVID-19 across the globe, these issues have only become worse. On August 22nd, Cbass held a 24-hour stream raising funds for the Anxiety and Depression Association of America—a charity dedicating their time and money to raising awareness of and helping those affected by depression and anxiety.

By the end of the event, Cbass managed to raise a whopping $4,000! Another huge thanks to the Age of Empires community and all those involved who continue to offer their time and support to these amazing causes.

The BIG NOMAD Cup—the first tournament hosted by OrnLu_AoE—featured eight teams in a thrilling 4v4 nomad event. With a $900 prize pool, teams settled in an unknown world and adapted their play to the randomly-assigned civilizations.

RESULTS
After an amazing month of team Nomad action, Ornlu_AoE has crowned a dedicated team the Nomad Champions! In a nail-biting final, Handcannons OP defeated O Mai Goss in a 4-2 victory, claiming the title and the crown. Well Played!

In August, we were treated to The 1v1 Supremacy Tournament — hosted by Riotcoke. The tournament featured each player using an anonymous account to play their matches on, leading to unpredictable games and strategies.

RESULTS
The tournament was ultimately won by Mitoe, who won the finals 4-1 against OPTIMUS__PRIME. Aizamk managed to elude everyone’s guesses by playing in an even more unique way than we expect from him, thereby winning the prize for being the least correctly guessed player.

Battle of the Four

Battle of the Four—brought to you by fenrir5—invited four of the world’s best Brazilian Age of Empires II players together for a round-robin event. The four participants, F1re, Miguel, St4rk, and dogao battled it out for the lion’s share of the $900 prize pool.

RESULTS
Congratulations to our Brazilian champion, dogao! He played fantastically against all his opponents and has earned his title as the top player in Brazil