Hello Explorers! We hope that you’re enjoying the release of Age of Empires III: Definitive Edition as it continues the story that began 15 years ago while writing an all-new chapter in the Age of Empires saga!

Leading up to today’s launch, we received questions about all the things that changed since the release of the Complete Collection in 2013. Well, the short answer is: quite a lot!

It’s likely you’ve already heard about the upgraded graphics, new UI configurations, new campaign missions, and new gameplay modes—such as the Historical Battles and Art of War series. While these capture several of the most visible new features and systems we’ve added to the game, there have also been a multitude of balance and gameplay changes which long-time fans of the series will have begun to notice during the recent Streaming Event. In fact, of the 133,000+ individual changes and additions made over the course of remastering the Age of Empires III: Complete Collection, the team over at Forgotten Empires has (very kindly) curated a list of the notable gameplay additions you’ll discover as you once again venture forth into Age of Empires III: Definitive Edition.

Here are some of the highlights:

An important forewarning: this is a *rough* list of the adjustments and additions to the game, and has not been cleaned up or translated for casual players.

Parts of it will come across as “dev speak-y,” or may dive deeper into the gears and inner-workings of the game than normally visible to casual players. That’s okay; more than 75 pages of changes is a lot to digest (having done it, we don’t expect anyone else to read and memorize everything for Friday’s quiz). Over time, you’ll find most of these changes cleaned up and properly categorized on the Age III wiki; but for now, we hope that this provides some insight into the game for those who want a deep-dive into everything that changed since they last played; that, and the inspiration to jump in and experiment with some of the changes to your favorite civs, maps, and strategies yourselves!

So, without further ado, read on for the full, DEFINITIVE changelog—one that will establish a new beginning for Age of Empires III over the next 15 years! 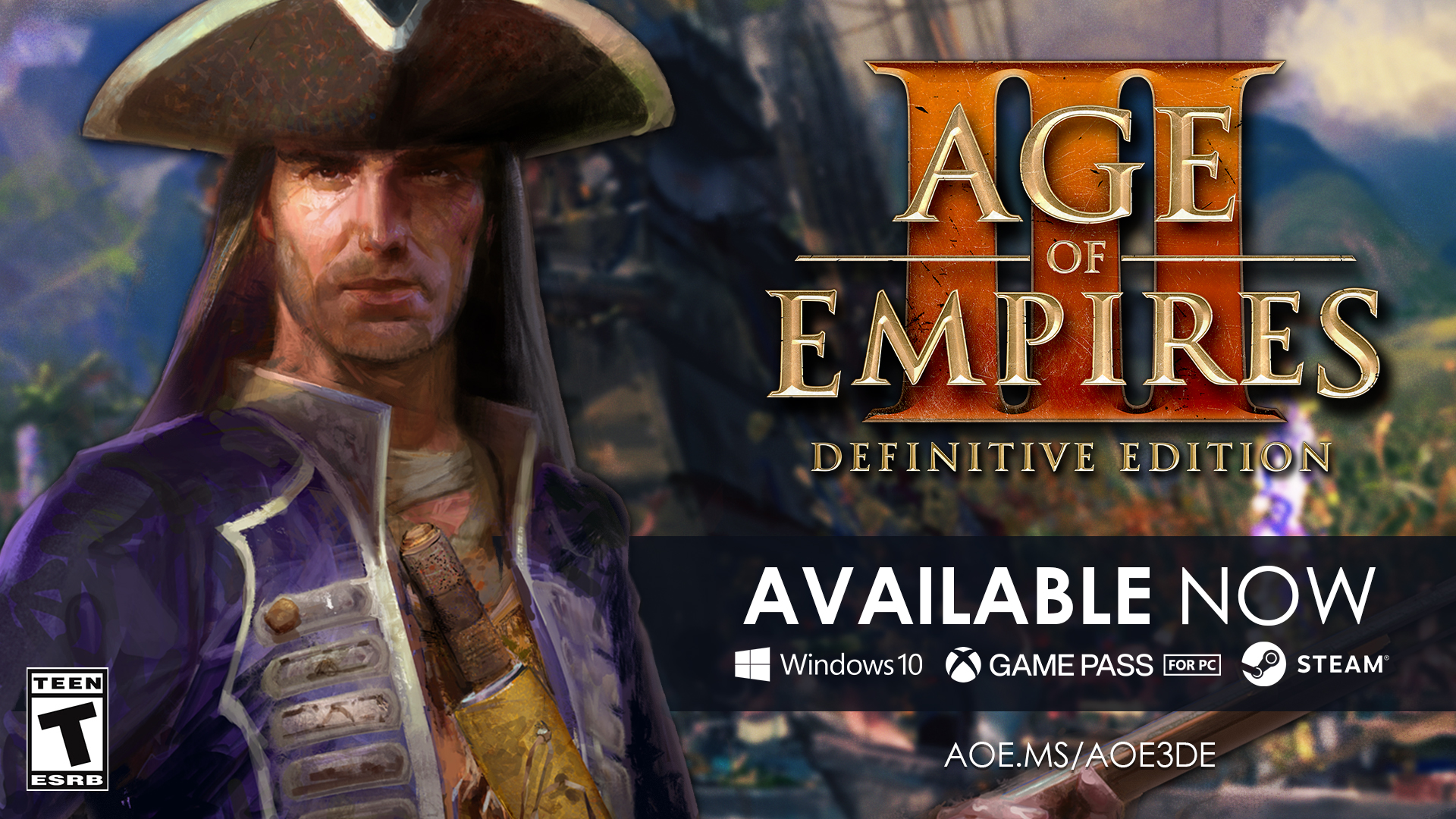 Having trouble? Visit our support site! 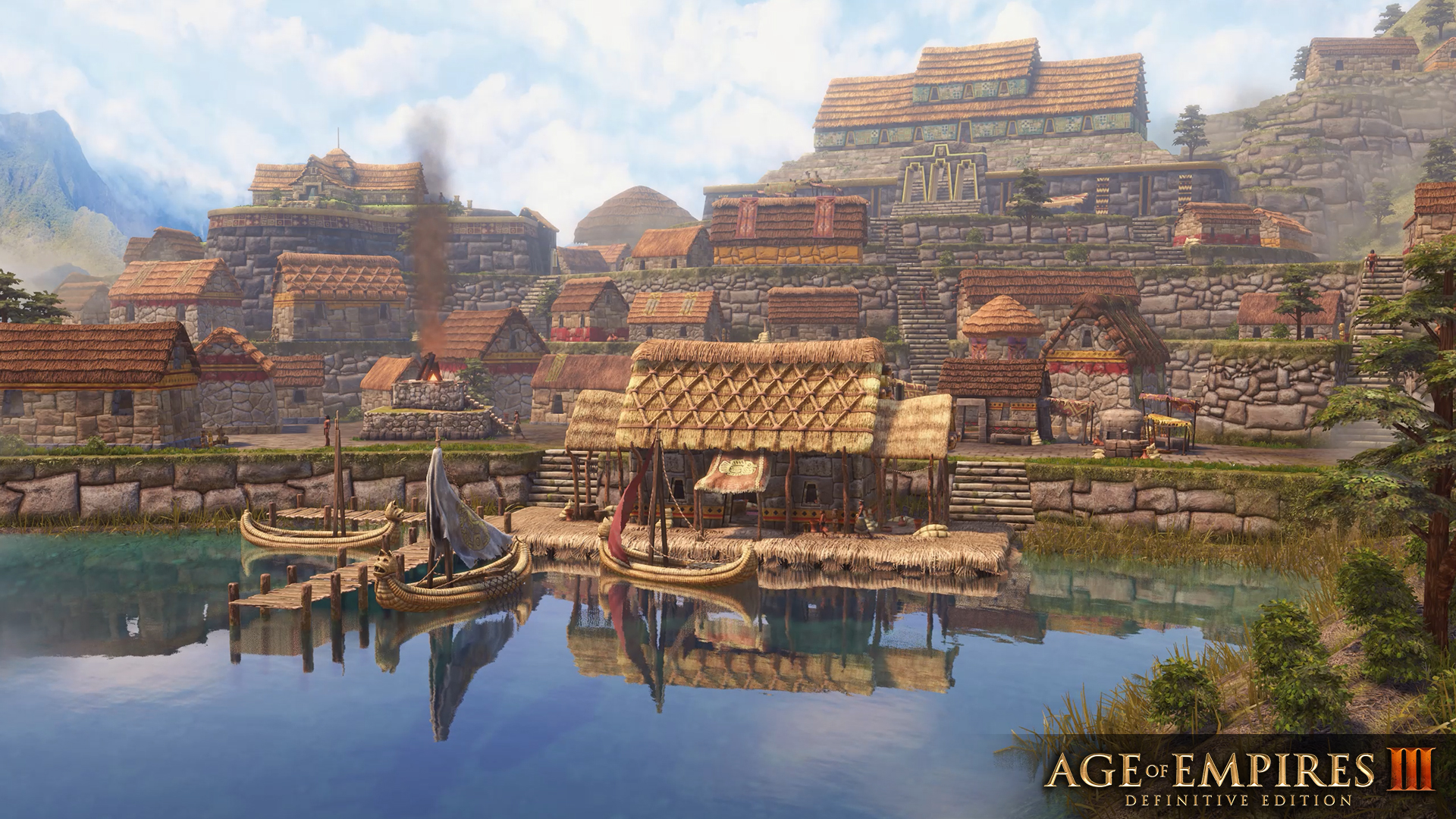 “A vast South American empire known for the power of its defenses and administration.”

In Age of Empires III, the Inca are tooled to build-up and maintain firm control over a wide area. On the whole, they are a robust, defensive civilization.

“A large Inca House that supports 12 population and produces food.”

“Defensive Inca Trading Post that supports 5 population and can shelter civilians, who strengthen its attack.”

“A powerful military building that can train and garrison all military units to strengthen its attack.”

“The Sapa Inca is a powerful, Heavy Infantry Warchief armed with a polearm and long-range javelin ability; effective against Treasure Guardians and cavalry. As Emperor, his leadership aura inspires Native Warriors and increases their hit points.”

“Fast Inca scout with a great deal of utility. Is a powerful treasuring companion who can construct various buildings to expand the Inca empire.”

“Heavy Infantry armed with a feathered spear. Good against cavalry and buildings.”

“Fast moving warrior armed with a mace. Can easily disengage from fights. Good against skirmishers and artillery.”

“Ranged warrior who hurls bolas for a wide area of effect. The bola slows down enemies. Good against cavalry.”

“Powerful Heavy Hand Infantry which inflicts splash damage with a large bludgeon. Good against buildings, cavalry, and anything within range.” 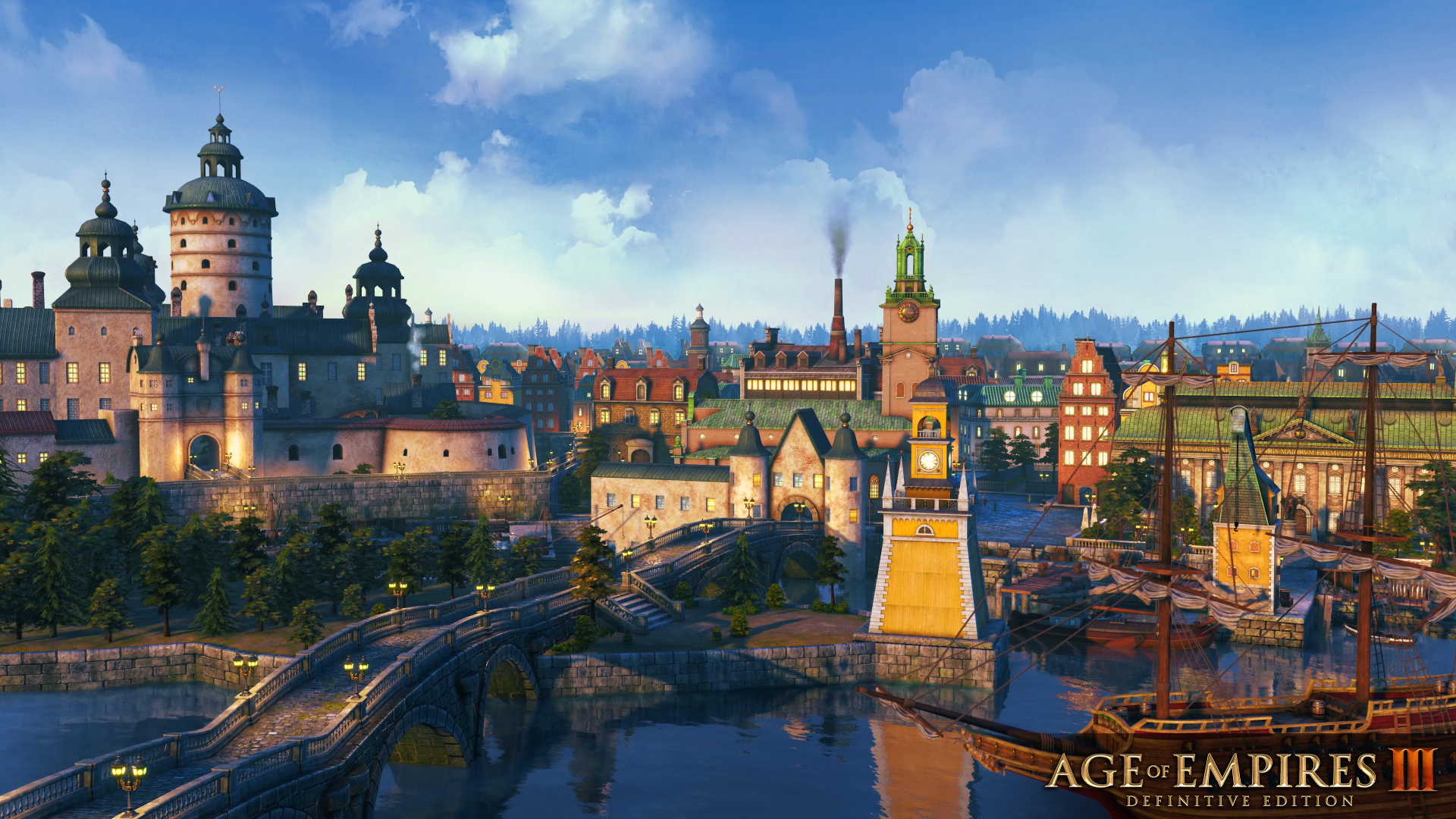 “The Swedish Empire became one of the greatest in Europe through innovation in military tactics and logistics. Its artillery and cavalry charges dominated the battlefields, particularly during the Thirty Years War. Despite a relatively small population, the Swedes fielded some of the largest armies in Europe, partly through the recruitment of mercenaries.”

In Age of Empires III, the Swedes have easy access to military technology, and utilize soldiers that are tactically divergent from traditional European units. With no Skirmisher or Dragoon, they rely more heavily on the Saloon to cover weaknesses and unlock the right Mercenaries to accommodate their playstyle. Ultimately, the Swedish must strive to maintain control over their natural resources to field impressive armies.

“A Swedish House that spawns a small Berry Bush and automatically gathers nearby resources.”

“Swedish Musketeer that fires quickly and counters Cavalry from range instead of at melee distance. Can charge quickly with his sword equipped. Good in melee combat.”

“Light, affordable artillery than can fire and reposition quickly. Good against infantry.”

“Heavy Hand cavalry from Finland with a powerful short-ranged attack.” 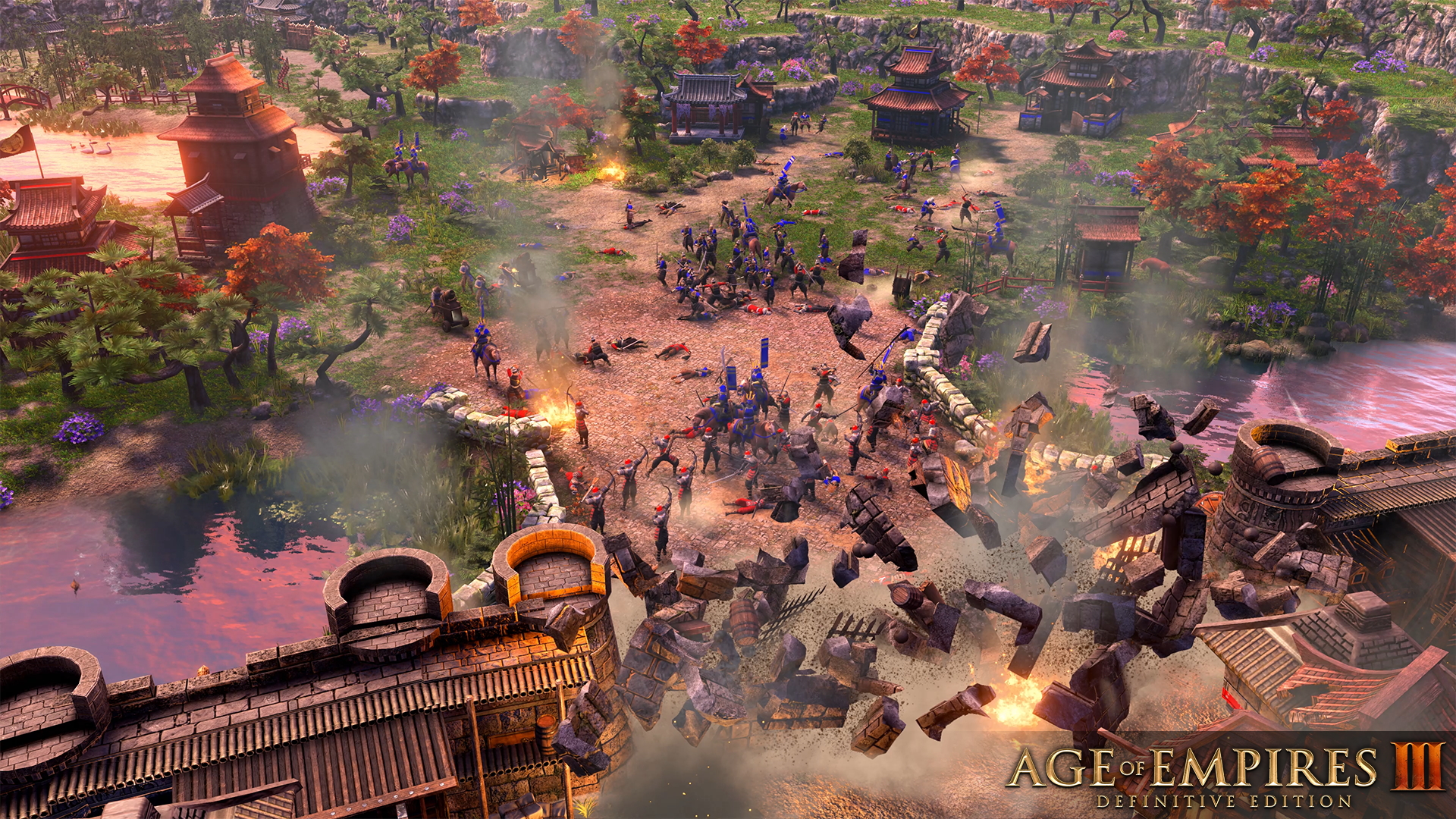 “Ships 10 Corsair Marksmen and enables Privateers to be recruited from the Dock. Settlers become Barbary Warriors instead of Revolutionaries.”

“Your settlers gain a powerful ranged attack instead of becoming Revolutionaries.”

“Every shipment delivers a bonus Mameluke.”

“Delivers 4 Frontier Blockhouse Wagons. Your settlers become Karelian Jaegers instead of Revolutionaries. They can gather from Crates and Trees and can construct Blockhouses.”

“Ships 4 Cetbang Cannons and enables you to construct them. Wokou Junks can be recruited at the Dock. Settlers become Javanese Spearmen instead of Revolutionaries.”

“Settlers gather more quickly instead of becoming Revolutionaries and can garrison in Trek Wagons for transport and protection. Ships 3 Trek Wagons.”

“Ships 10 Gauchos and 10 cows. Enables you to recruit Gauchos, which can gather from livestock and slow enemies with bolas.”

“Voluntarios da Patria rally to your cause!”

“Grants 10 Hussars of Death which clear all their wake”

“Revolutionaries have 25% more hit points, but are more expensive. Town Centers and Saloons spawn pirates for free. Privateers can be hired at Docks.”

“Your settlers become Vaqueros which can gather from livestock and are armed with a revolver.”

“Simón Bolívar leads the cause! He grants +5% hit points to nearby units.”

“Ships 1 Fort Wagon. Gatling Guns have +25% more hit points and all Forts spawn one for free.” 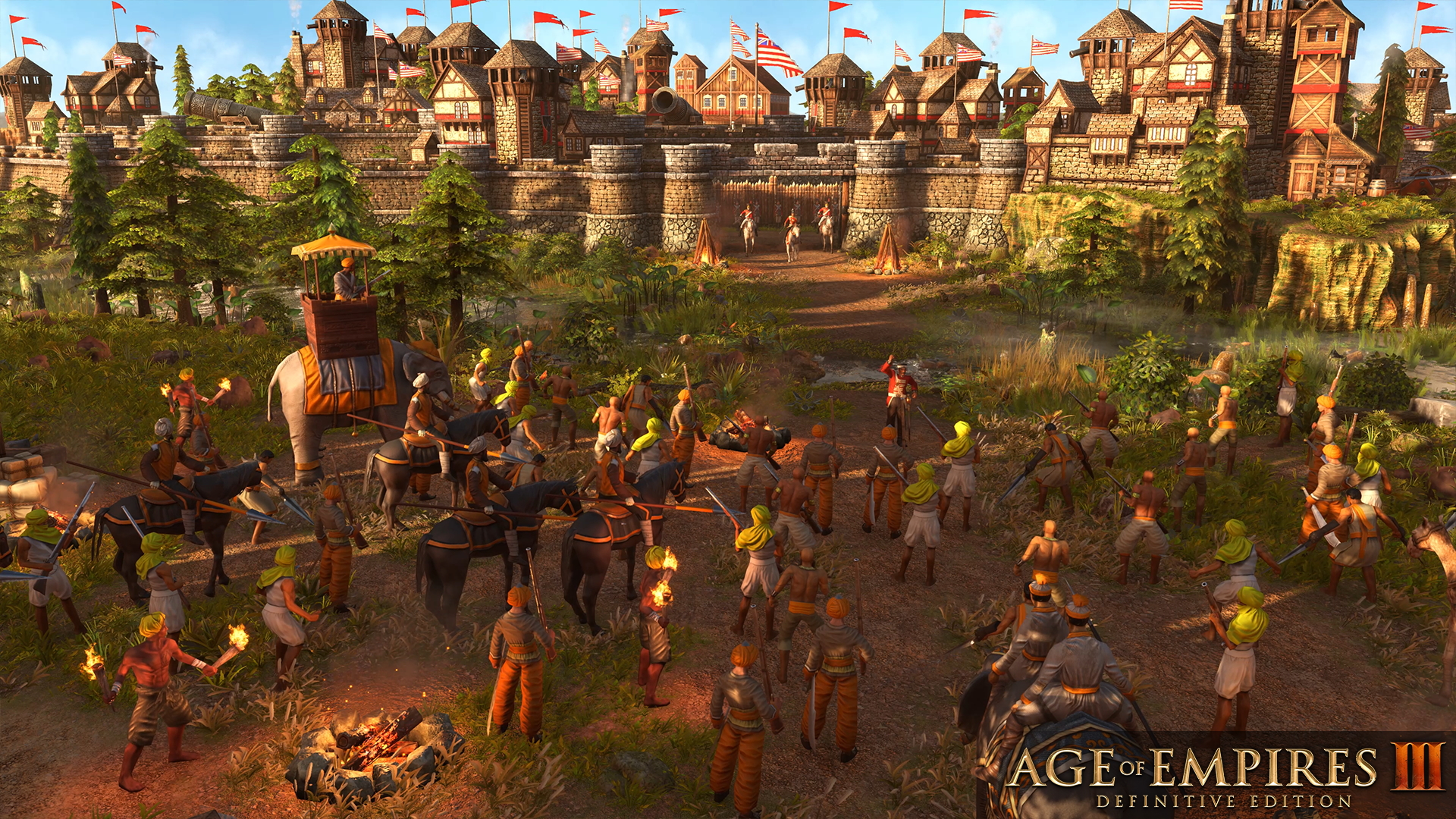 Added The Knight (V) to all European civilizations as an option to advance to Age 5.

Added The Logistician (II) to all European politicians (except Ottoman) as an option to advance to Age 2. The politician costs 900f and has the following unique benefits for each civilization:

Added The Logistician (IV) to the British, Dutch, Ottomans, and Russians as an option to advance to Age 4 with the following benefit:

Added The Mercenary Contractor (III) to the British, Dutch, Ottomans, and Portuguese as an option to advance to Age 3 with the following benefits:

Added The Mercenary Contractor (V) to all European civilizations as an option to advance to Age 5 with the following benefits:

Added The Papal Guard (IV) to the French, German, Portuguese, and Spanish as an option to advance to Age 4 with the following benefits:

Added The Inventor (II) to all European civilizations as an option to advance to Age 2 with the following benefit:

Added The Inventor (V) to all European civilizations as an option to advance to Age 5 with the following benefit: 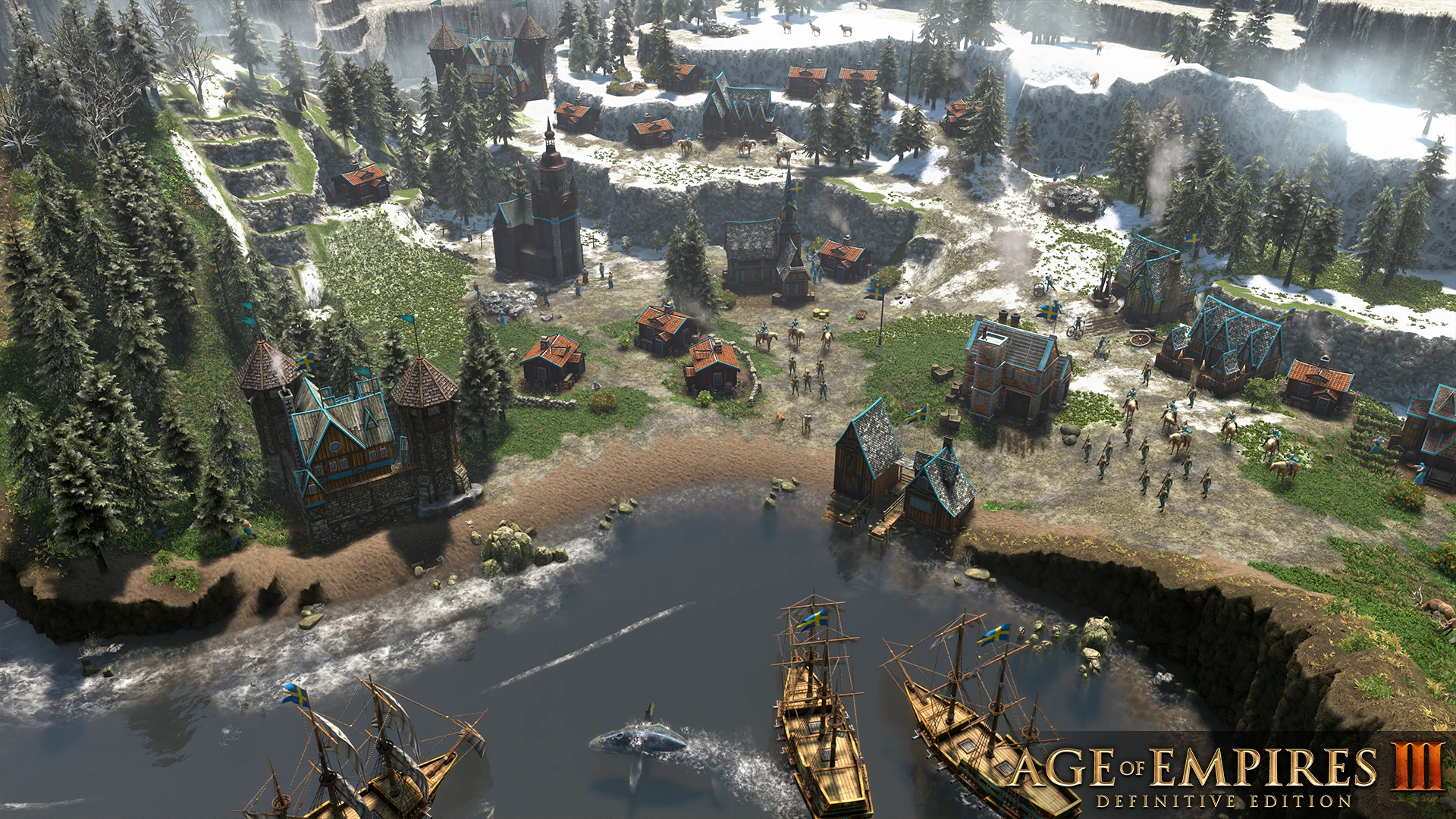 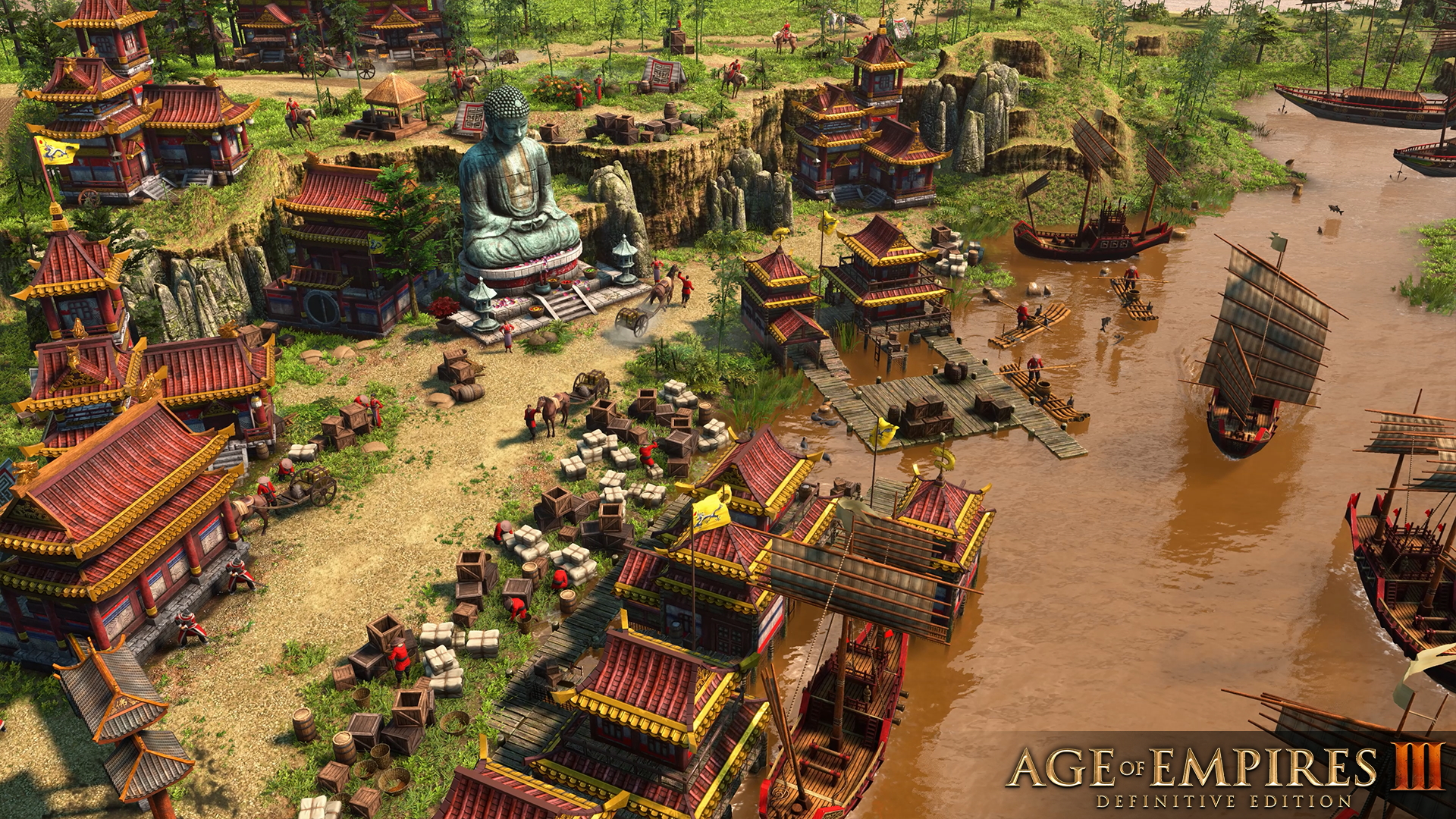 The Lakota and Haudenosaunee can no longer task villagers to coin mines; mining has been replaced with a new coin income mechanic, the Tribal Marketplace:

Added a Cooportation Big Button to the Tribal Marketplace which costs 600f and 600w in Age 2, and provides the following benefits:

The Nature Friendship ability has been replaced with the Recruit Guardian ability, which is similar and can be used on any human treasure guardian (90s cooldown):

The following cards have been reworked:

The following maps have rebalanced for competitive matches 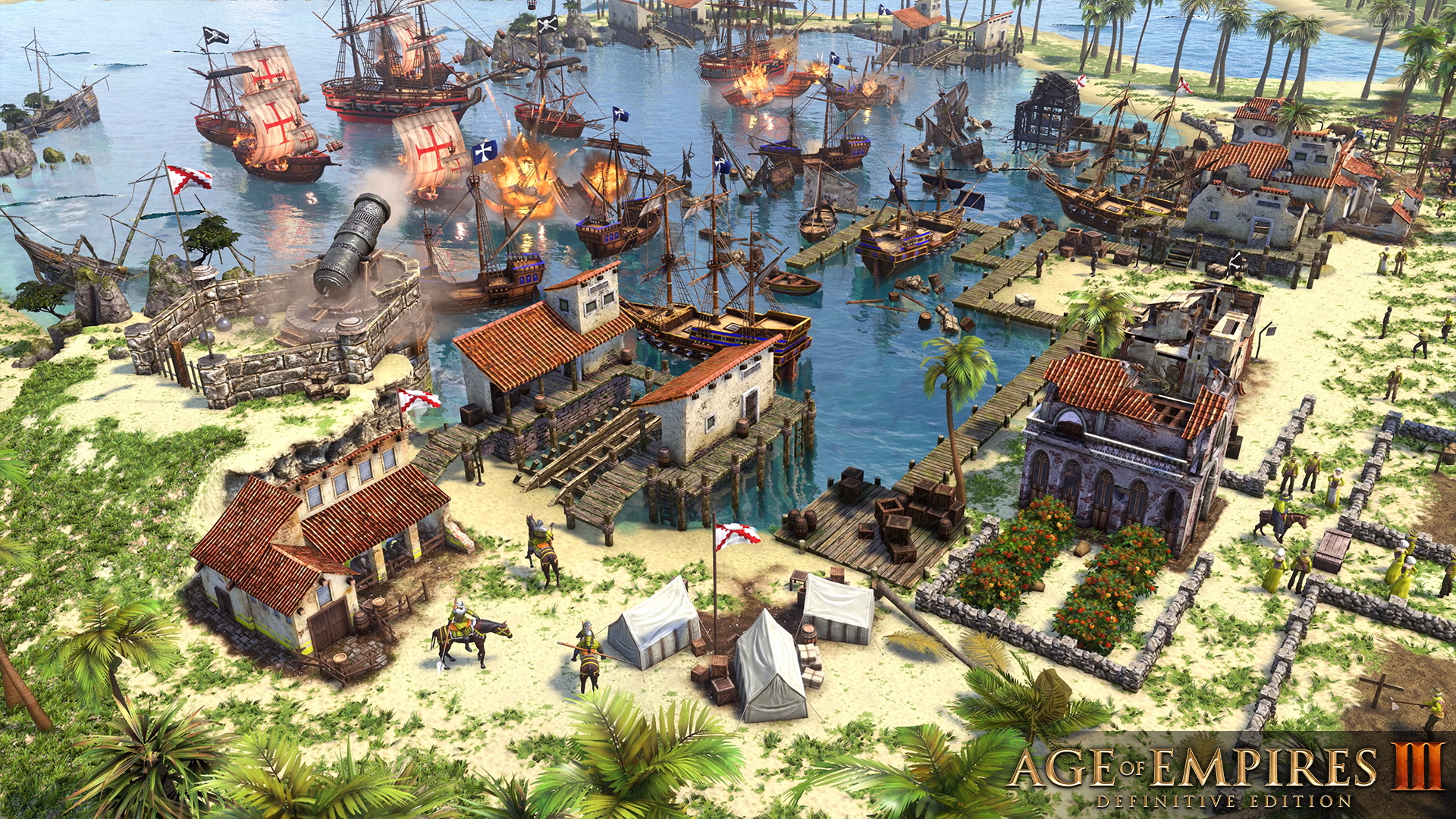 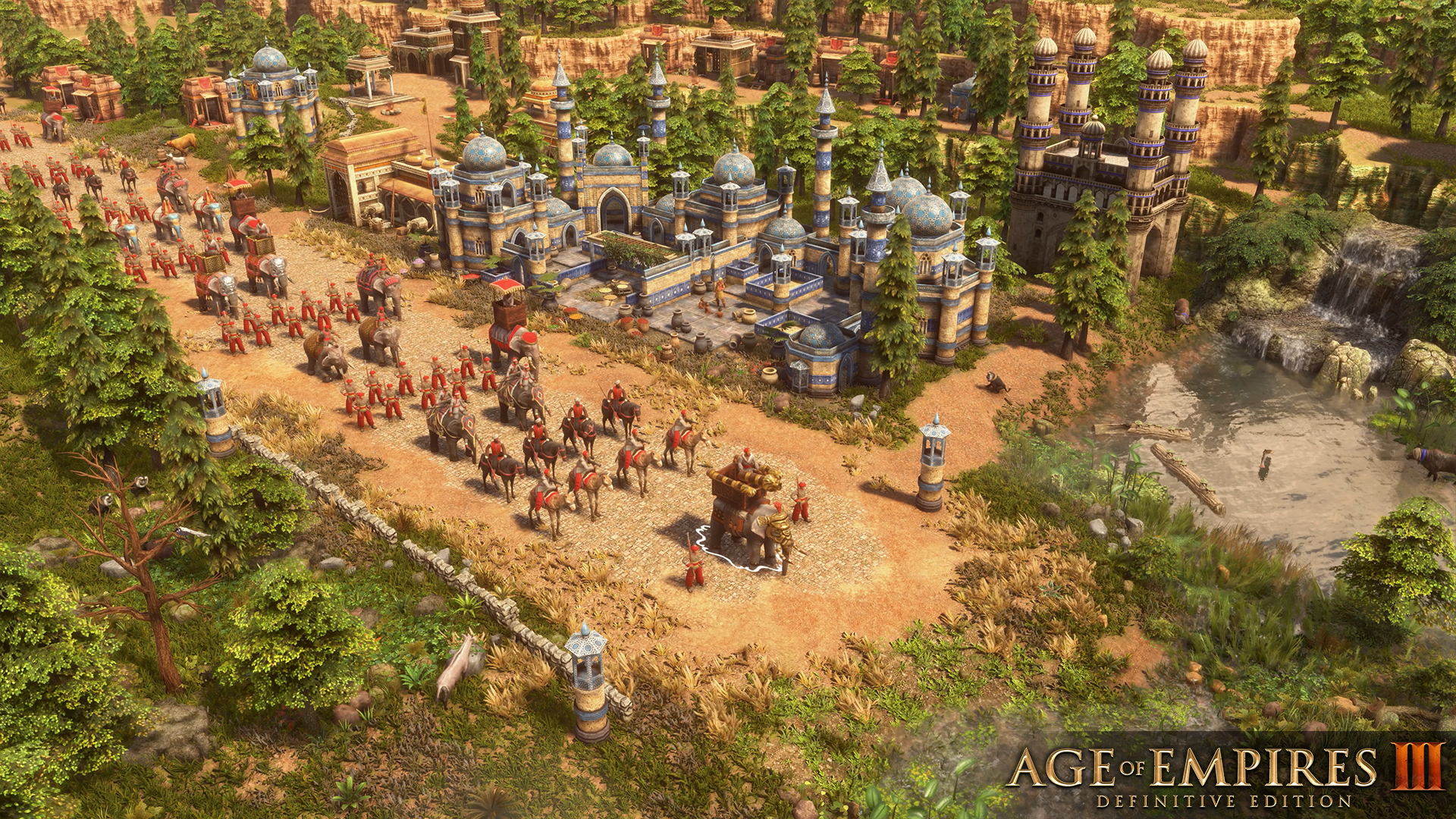