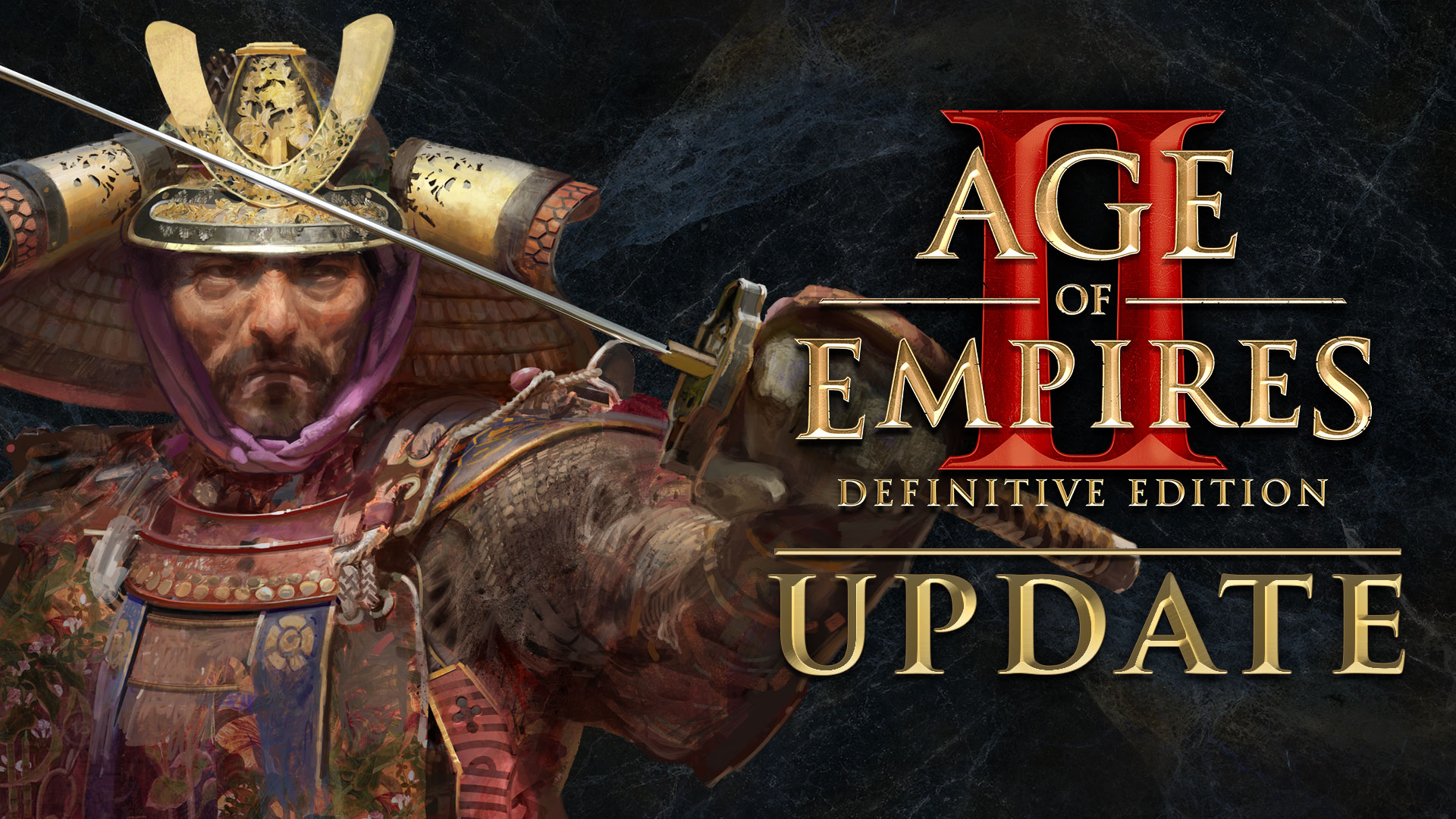 Hello and welcome to another release filled with exciting updates, balance changes, and bug fixes for Age of Empires II: Definitive Edition!

Today’s build brings several fixes to the game, which reduce the likelihood of a freeze or client crash, as well as numerous other fixes and balance changes available for you to discover in this post below. Many of these changes and fixes are a direct result of the Public Update Preview program (or PUP). For more information on the PUP—or to get involved—click the link above or scroll down to the Ongoing → Public Update Preview Program (PUP) section of this post.

We’re pretty excited about making today’s build available to you – it contains a few pretty significant changes, including Co-Op! Below is a brief highlight to help break it all down:

Alongside plenty of fixes and features included in today’s build, we also bring you the Lords of the West event!

Join the "Lords of the West" Event! 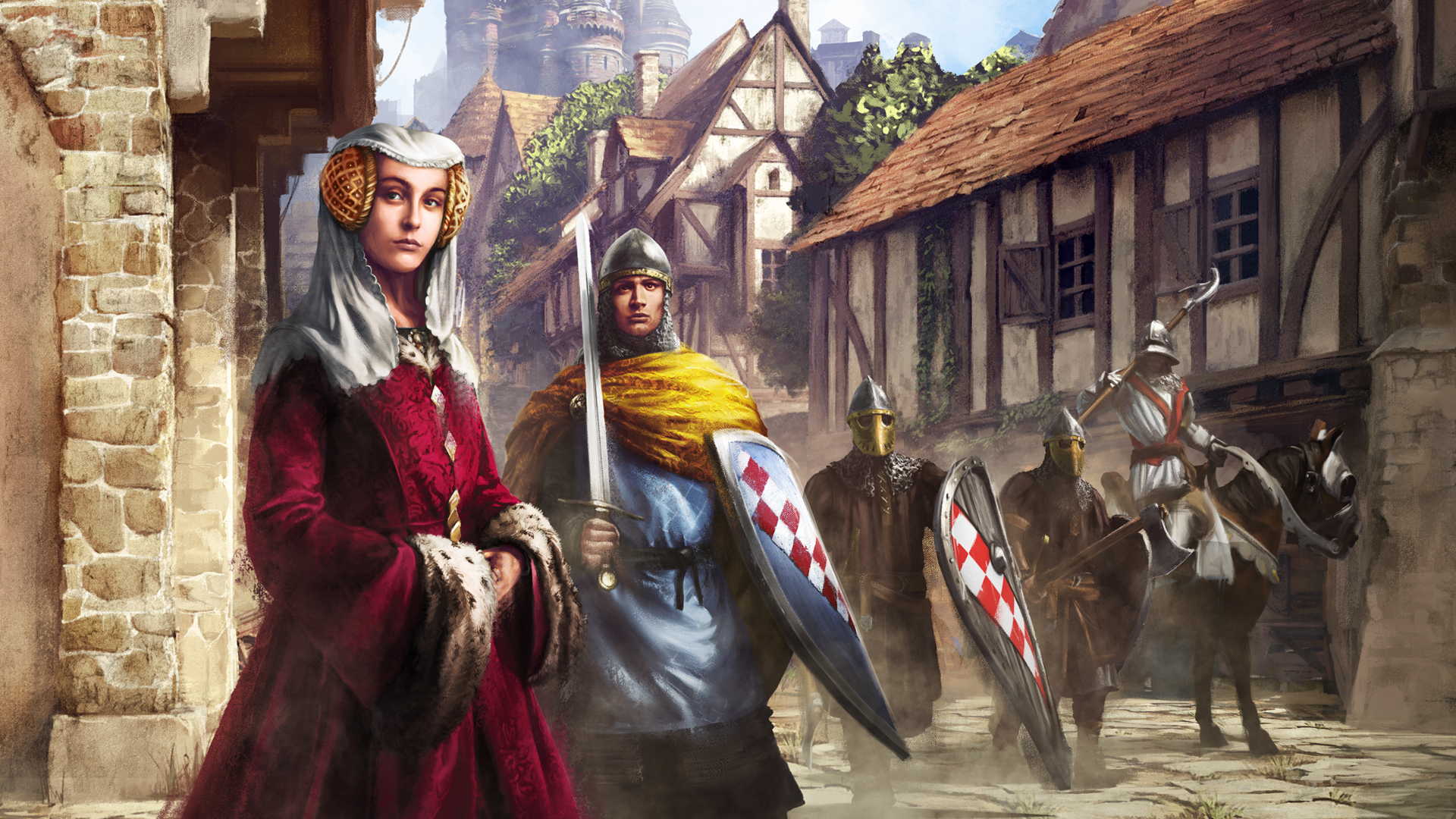 Age of Empires II: Definitive Edition is celebrating the month of July and The Lords of the West with a unique Event!

While this Event is active, everyone will be able to play as the Civilizations contained in the popular expansion – the Burgundians and the Sicilians! This is true for all players, whether you own Lords of the West or not. The Civs will be playable in Multiplayer or Skirmish matches, and we’re including a fun group of Challenges specific to the Civs alongside some super cool rewards: 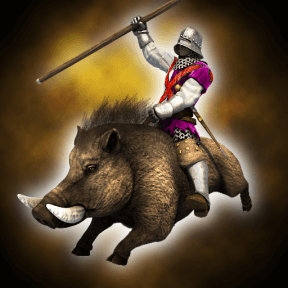 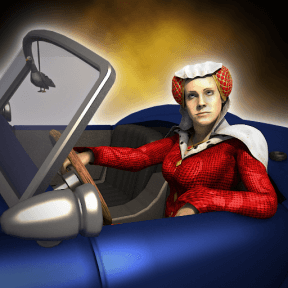 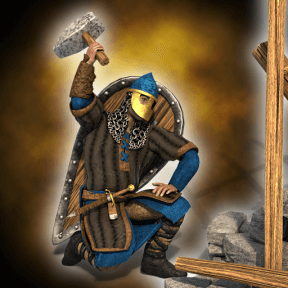 Starting TODAY through July 20th, complete the in-game tasks within the time limit to unlock exclusive rewards! In addition to the normal daily rewards, we’ve added two additional bonus challenges to this event!

We hope you enjoy your access to the Lords of the West Civilizations. If you enjoyed them and are interested in the Campaign content and learning more about this fascinating point in history, you can obtain those through your platform of choice.

The Lords of the West Event concludes July 20th.

It’s finally here—Co-Op for Age of Empires II: Definitive Edition has arrived! What’s more fun than leading the charges down the Roman Empire as Attila the Hun? Charging down the Roman legions with a friend by your side! 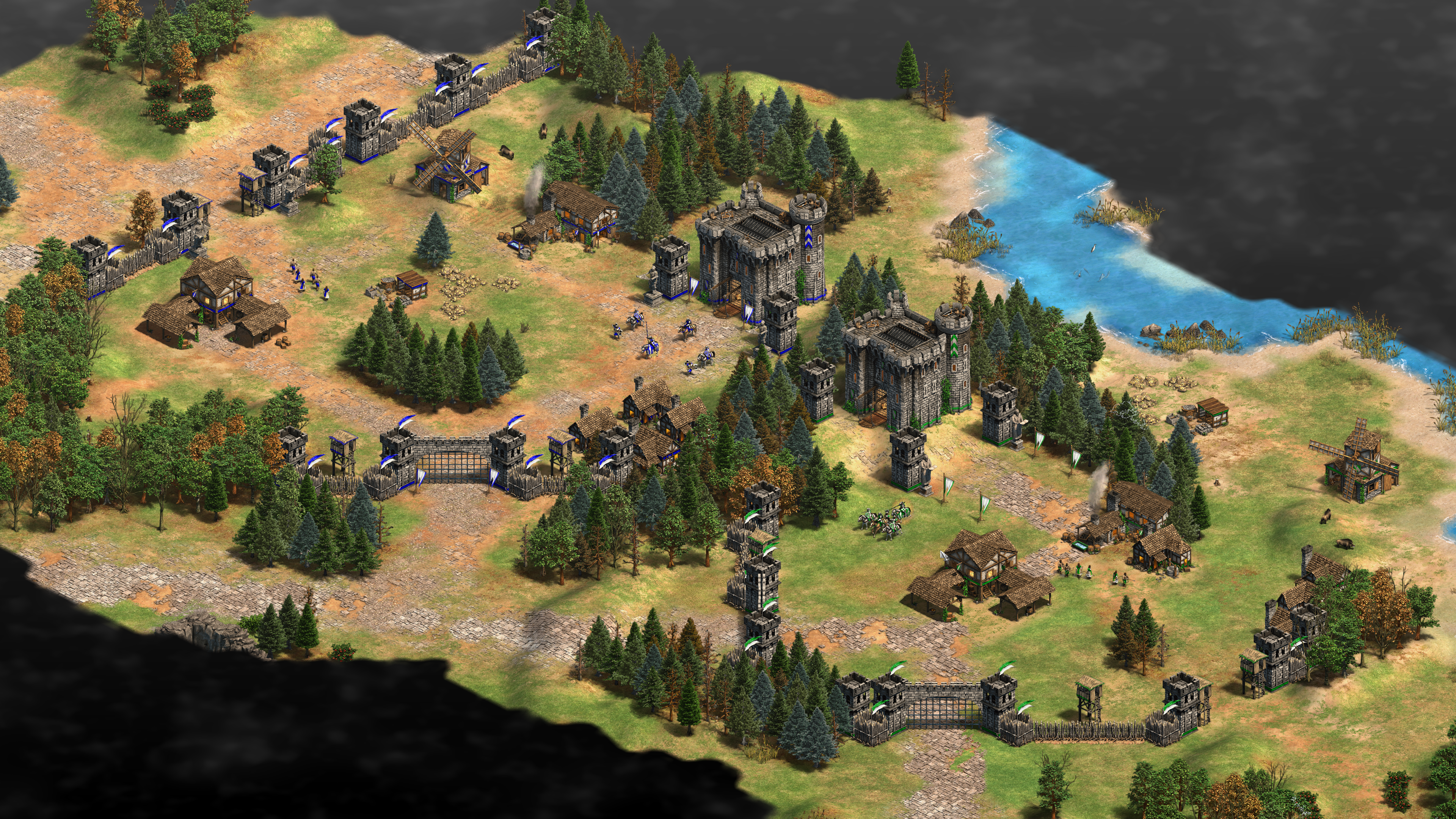 If you’re curious about exactly which Historical Battle and Campaign Missions you’ll be able to play with friends, we’re providing a full breakdown here:

First up, these are the Co-Op Historical Battles you can play today:

Then, as we work with your feedback, we’ll be fully launching Co-Op in a future update including all of the following Co-Op Campaign content:

Where to Find Co-Op: 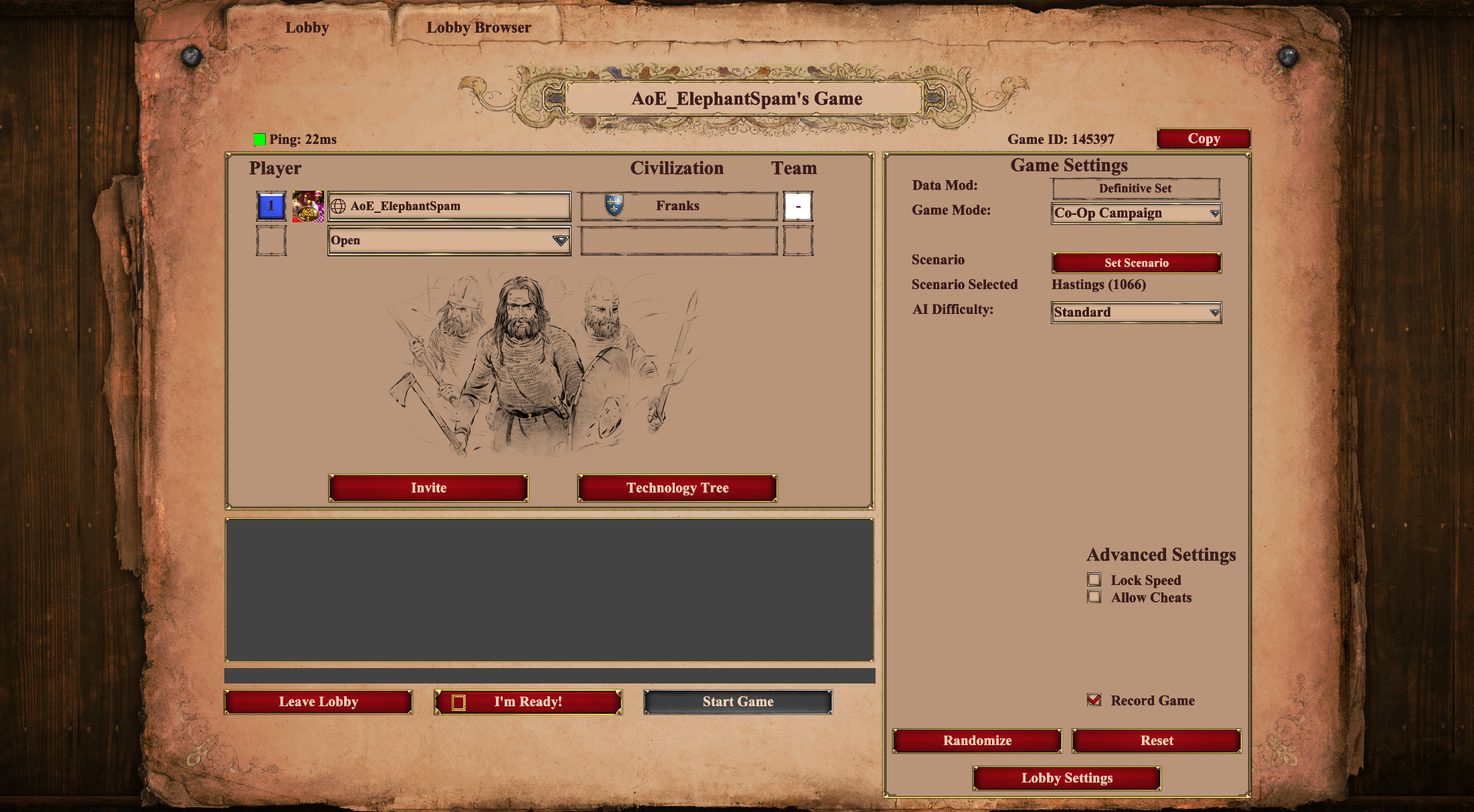 What to Expect from Co-Op:

Co-Op Historical Battles and Campaigns bring a cooperative Multiplayer experience to the vivid story-driven Campaign content you’ve been playing for so many years, making it feel pretty new and different from how you’ve experienced it all up to this point. We’re genuinely thrilled to see how you like it, and also use your feedback to improve what’s there before releasing all of the remaining content that’s waiting for you!

You can expect all the same Campaign quality you know, and you get to bring a friend:

Additionally, all AI players have been updated to now fight against two opponents instead of one. You’ll need to coordinate to conquer!

Following our announcement that Ranked Deathmatch will continue in the form of a Custom Lobby solution in a future Update, today, the change that replaces Deathmatch with Empire Wars takes effect in Ranked matchmaking. You’ll see this change when navigating to the Multiplayer -> Ranked screen:

Just a few things to make you aware of as you start working on your ELO for this mode:

And on the CaptureAge side of things, you can now control Replay speeds from within CaptureAge!

CaptureAge is currently available to all Steam users for free.

The unique technology Artillery has their stone cost replaced with wood and now costs 500 gold and 450 wood.

Eleven new maps, which were featured in Red Bull Wololo 4 have been added to the map pool:

During the recent E3 2021 Xbox and Bethesda Games Showcase, we showed off more about our upcoming Dawn of the Dukes DLC! We’ll have even more details on this soon, so stay tuned to our channels for more information!

April was the first time that we pushed balance changes to the PUP, and we’re thankful to our users who helped us identify bugs which we’ve since been able to address ahead of the the launch of this update.

We were also able to validate a fix for game freezing that wound up being pretty difficult to track down. The PUP continues to be one of our best tools for resolving complex issues, and we’ll be utilizing the PUP more and more in the months ahead.

After last week’s massive Age of Empires II Update 50292, the team has worked tirelessly to address critical issues found by you, made available RIGHT NOW in Hotfix 50700!