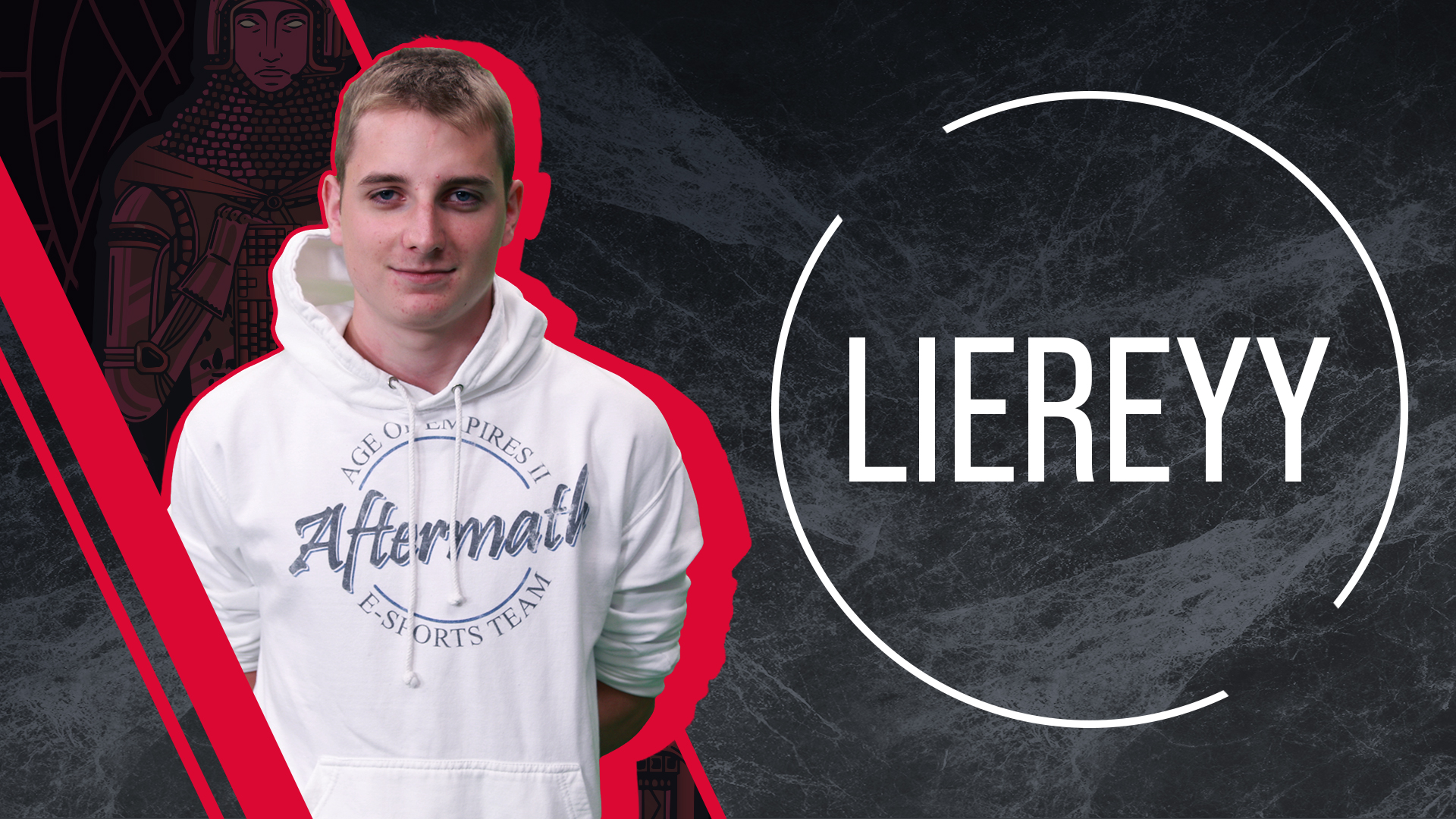 Hello, everyone, and welcome to this special community spotlight!

Today we’re excited to introduce you to Liereyy: a well-known name in the Age competitive scene, hobby streamer, member of Team Aftermath, and recently-crowned CHAMPION of the Red Bull Wololo 2 tournament following a nail-biting Grand Final against his Aftermath teammate, Hera. So without further ado, here’s our chat with Liereyy!

WORLD’S EDGE: Can you tell us a little about yourself and how you got started playing Age of Empires?
LIEREYY: I’m Liereyy, 18 years old, and from Austria. I got into Age of Empires through my family, who played the game when I was 7-8 years old, by watching them.

WORLD’S EDGE: How would you describe your play style, and does that change at all with Empire Wars?
LIEREYY: I like to play aggressively and force mistakes from my opponent. I would say in Empire Wars, it’s just easier to play aggressive because you have a lot of resources to work with and it helps that the meta hasn’t been figured out completely on most maps, so defensive play is much harder. Some recent changes—like having your starting scout instead of two horses—helps as well.

WORLD’S EDGE: Would you say that you enjoy playing Empire Wars because it suits your strengths so well?
LIEREYY: I definitely like how most games play out on Empire Wars, but I do enjoy RM (Random Map) games as well. I would say that both game-modes are similar once the [Empire Wars] match stabilizes after the first minutes, and then it becomes a normal RM game. I enjoy both game-modes equally despite winning the recent Red Bull tournament on Empire Wars, since a lot of my RM game experience helped me win the tourney in the first place.

WORLD’S EDGE: How did you feel winning Red Bull Wololo 2 after coming so close to the crown in so many other tournaments?
LIEREYY: It was a relief! I’m not affected by results or people saying anything, but it definitely felt good to win a big tourney. The win confirmed my thoughts about how to be the best and what to do to get there. It showed me that in Age of Empires, you have to be able to adapt and play more “styles” if you want to compete to be the best.

WORLD’S EDGE: It must have been pretty special having an all-Aftermath final when playing against Hera. How much preparation did you do and how did you adapt before Red Bull Wololo 2?
LIEREYY: I prepared with Hera a few days before Red Bull started. Then, after every round, we prepared for our next opponent. We took all the things we remembered from RBW1 and adapted from there by playing and preparing for a big final, and getting rewarded by being in it was great!

WORLD’S EDGE: What do you do to stay in shape? You are renowned for spending a lot of time playing DotA2 and other games; does it take much to get back into the Age of Empires 2 rhythm?
LIEREYY: Yeah I have heard that myth! I don’t really spend too much time on AoE if there isn’t a tournament to prepare for. I just find other things more enjoyable to do: mostly real-life hobbies, but I still play other games for fun on my pc. It’s not really that hard to get in shape again since I still do some stuff here and there, and I already have so many weekly and monthly breaks from Age of Empires by now that I’m used to it.

WORLD’S EDGE: King of the Desert 3 will be starting soon; do you have anything special prepared, and what are your personal goals for the tournament?
LIEREYY: I don’t have anything special in mind, I think I’m just going to practice a lot and make sure I’m in top shape. My goal is to win the tournament, but that’s gonna require a lot of preparation and me being at the top of my game!

WORLD’S EDGE: What is your favorite tournament that you have participated in, and what would you like to see in future tournaments?
LIEREYY: My favorite tournaments are LAN tourneys. I think the fact that you can meet your teammates who became your friends over a long period of time and hang out with them is just super enjoyable. To that end, I hope that there will be more tourneys like Nili’s Apartment Cup and Escape Champions League events in a LAN setting. Of course, I also love competitive offline tournaments like King of the Desert or Hidden Cup, so I hope these events will stay!

WORLD’S EDGE: Is there anyone you would like to give a shout out to?
LIEREYY: I would like to give one to Hera. We have been practicing for every recent tourney together and also talk about a lot of real-life things and we help each other out a lot. He is one of the few people who I can really trust with my experiences.

WORLD’S EDGE: Any plans to stream on twitch more often?
LIEREYY: It’s hard to say, but for now I’m just going to stream every now and then when I find some free time. Now that my last year of school is starting and there are a lot of tournaments happening, I’ll focus on other things first and worry about those things later.