It’s hard to believe, but tomorrow will mark the two year anniversary since the release of Age of Empires II: HD Edition on Steam. In those two years, players have created over 10,000 items in the Steam Workshop, and spent more than fifty million hours training armies, converting units, and chopping trees. In fact, more people have played over 50 hours of AoE II: HD than live in Little Rock, the state capital of Arkansas. It’s clear that the franchise has a hugely dedicated user base, and today I’m excited to talk about where we’ll be taking the title through 2015. 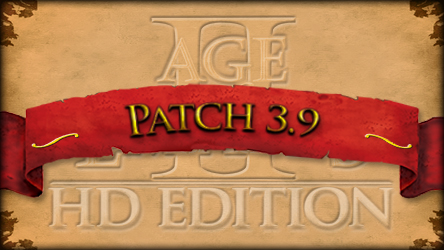 If your Steam client is open, the first step in that journey has likely downloaded in the background already. Age of Empires II: HD Edition will be updating to version 3.9 today, with several user-facing and under-the-hood changes to the game. From the gameplay side, there was a focus on improving how teams get handled in games. To that end, real world maps now have a ‘team together’ option designed to ensure those 2v2 games are more about team battles. Additionally, the ‘team lock’ checkbox functionality has been improved to ensure the correct status is displayed when scenario files are used during game creation. If you’re creating a scenario, putting team lock in your scenario will now properly ensure users can’t break the scenario by switching teams.

The number one request we see on the forums and in feedback from the community is a desire to continually improve the performance of the title, especially as higher numbers of units and objects appear on screen. It proves especially tricky with this type of project where so much occurs in-line in code, as opposed to much more compartmentalized system design found in more modern games. It’s been a big needle-in-a-haystack hunt since early development, and we’ve found quite a few needles since launch. We’re still hunting, and today many users should see another improvement to performance within their game. The biggest changes should be visible when large numbers of units and trees are on screen simultaneously, and we’ve seen some very large framerate jumps on lower-end systems. This can also help with scrolling speeds and perception of ‘lag’ in multiplayer games since more users will be running the simulation at higher speeds. But don’t take my word for it – go ahead and give it a shot. If you’re curious about your framerates, hit F11 twice in the game (once is the in-game clock) to see what framerate the render engine is running at.

There is one final change with today’s patch, and that affects individuals playing on unsupported operating systems. Exactly one year ago today, on April 8, 2014 – support for Windows XP officially ended. Incredibly, it’s nearly as old as the original Age of Empires II games, and while it was a great operating system for the time, times have indeed changed. Starting today, and moving forward with development on AoE II: HD, Windows XP will not be supported for new updates. We are making an XP branch publically available for you to continue playing content; however, we strongly encourage that the remaining XP diehards consider upgrading. Running unsupported and vulnerable operating systems is not a great idea, and puts both yourself and your data at risk. According to the Steam hardware survey, this will affect only a very small percentage of users. For more information about the Windows XP end-of-life, check out the Microsoft Support Page. The Windows 10 technical preview is also available for easy download if you want to test it out. As with any preview software, that is of course at your own risk.

Over the last few months, we’ve been laying some groundwork in development builds towards a roadmap I’m very excited to give some visibility into today. Let’s start with the most important piece of information:

We’ve got great stuff planned in development all throughout 2015.

I hinted at this during our April Fool’s day joke thread, but in case some people thought it was part of the gag: rest assured, I’m very excited for the future of AoE II: HD. At the moment, I want to focus on where we’re going in the relatively near future.

When Age of Empires II: HD Edition was released, Valve’s Workshop was still in relative infancy. Storage and update calls functioned very differently than they do now, and of course, AoE II: HD did not have much in the way of inherent support for mods. In the beginning, people would mostly overwrite files to make changes, and with the core release of AoE II: HD, the Workshop functioned in a somewhat similar fashion. While it works, it’s not the ideal route.

Fast forward to today, and Skybox has done workshop integration for a number of games with vastly improved SDKs from Valve’s side. Our goal in the upcoming months is to make some dramatic improvements to the Steam workshop for Age of Empires II: HD Edition to make the experience much better for users. This includes a mod manager in-game to reprioritize loading and making mods active or inactive, improved file sizes and update capabilities for mod authors to prevent users from needing to subscribe to multiple packs, and enhanced mod capabilities for certain files types within the game. It will mean unsubscribing from a mod will be more immediate and effective than the current model. Expect a few bumps as we move to the updated Workshop model, but we’ll be as open as possible with beta branches to help mod creators and users make the transition.

The second big item we’re focusing on developing right now addresses some lower level systems. At the moment customers looking to play multiplayer must choose either vanilla or The Forgotten exclusively. With a larger potential pool of players in the base game, it creates a negative feedback loop of fewer lobbies showing in the expansion. I’d like to give a shoutout to the enterprising community members who created aoe2.net to help alleviate the lobby issue via a useful external site. In the future, we’ll be working to adjust the data structure within the game to allow all game lobbies to be listed inline within the game, loading the appropriate game information on the fly instead of clicking a banner manually. Likewise, you won’t have to flip between game modes to play base campaigns or expansion ones. There’s a lot of work to be done here behind the scenes, and many questions to be answered. For example, if you don’t have the expansions, what happens to all of the additional ones? At the end of the day, though, our goal is to make getting into a fun game quick and easy, as well as encourage people to host the newest content without fear of not getting players to join. After all, the best part of the game is actually playing it!

There are lots of smaller items, bugs, and improvements that will be made before we get to the next stage, but that’s a peek at some of our shorter term priorities. Skybox will be explaining in more depth some of the changes we’re making with Workshop and lobby functionality as we continue development, so stay tuned to the Steam announcements and game launcher.

Back in 2013, we had this crazy idea to work closely with a group born out of dedicated community members to do something very unusual: make an official expansion. Despite being somewhat uncharted territory, Forgotten Empires became a great content addition that both stayed true to the Age of Empires spirit and moved the franchise forward. Transitioning from a community collective into more rigid timeline schedules and people management of development team often is where projects can break, but the FE team had great discipline, and awesome content ideas as we brought new bonus campaigns to the expansion through last summer.

So with all of that said:

I am extremely excited to reveal that we’ll be working with the Forgotten Empires team to formally bring a new expansion to the Age of Empires franchise later this year.

We’ll be detailing the expansion throughout the year in developer blogs directly from the team, including one soon revealing the first new civilization. I’ll leave you with a teaser the team sent from one of the new units being worked on:

As with The Forgotten expansion, you can anticipate a lot packed in there, including new civilizations, campaigns, game modes, units, and more. If your focus is more on the original Age of Empires II experience, the new content development means you can look forward to additional support and features that benefit every owner. Since launch, AoE II: HD has come a long way, and with the help of the FE team and Skybox, this year is going to be the best yet.

So there you have it! Make sure to check out the update today, and head over to the forums if you’ve got questions. If you want to talk about the short term roadmap, we’ve got a conversation thread up and running for that, too! Finally, because I know there will be plenty of speculation as to the next expansion, let’s go ahead and centralize it into this thread. We won’t be answering much yet, but will give replies where we can.

From petitions and forums threads to today, it’s been an incredible journey to see what Age of Empires II: HD Edition has become. I think the future looks brighter still, for the sun never truly sets on a classic.