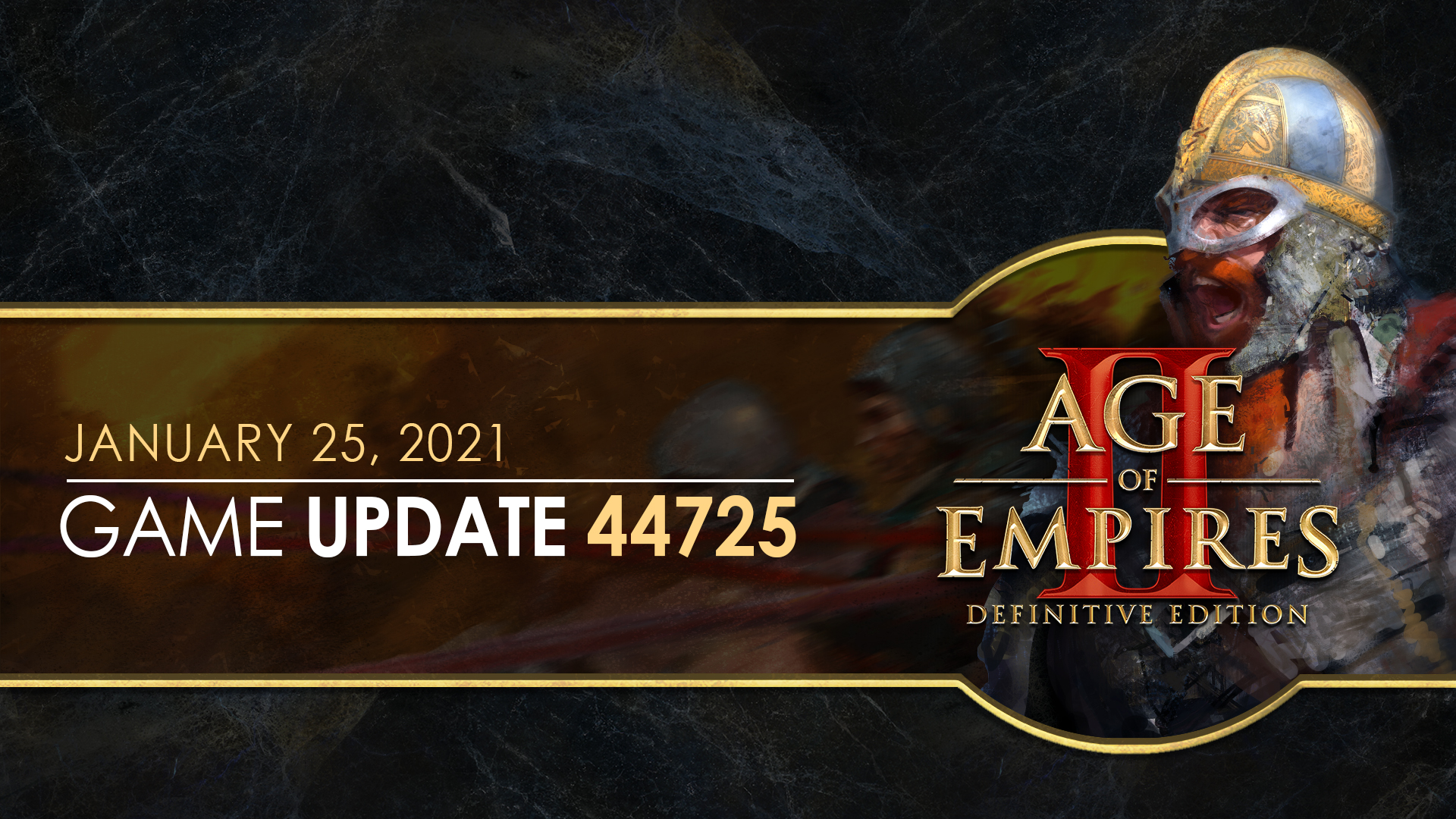 Welcome to another monumental week for Age of Empires II: Definitive Edition! Not only are we kicking it off with a transport ship full of features and fixes, but we’re laying the groundwork for the first official expansion—Lords of the West—which introduces two new civilizations, three new campaigns, and expands the tools with which to build your empire!

Update 44725 lays the groundwork for the expansion with improvements to the stability and performance of the game—including fixes for the multiplayer performance setbacks following the November update—along with several new features, a new in-game event, and other challenges to improve your experience. Check out some of the highlights:

We’re hoping this helps kick 2021 off to a *great* start, and creates a solid foundation for not only the expansion, but everything we have in store for the year to come (so much good stuff). As always, this includes input from all of you—the community—so come say hello:

We look forward to joining you for the big launch tomorrow, and hope you enjoy everything today’s update brings to the game! ♥

A new year means a new chapter in the history books, as well as another reason to celebrate in Age of Empires II: Definitive Edition!

2021’s NEW YEAR CELEBRATION EVENT introduces a new set of icons, new mods, new upgrade effects, and another reason to jump back into Age of Empires II: Definitive Edition to round out your collection! 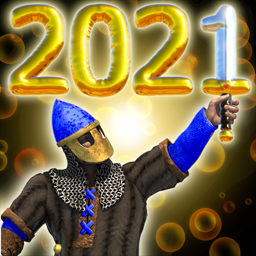 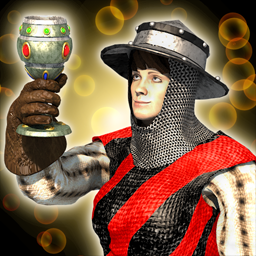 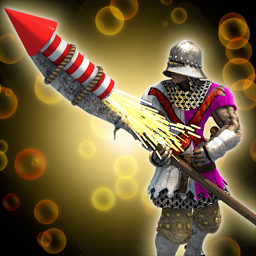 Remember: if you sign in to Xbox Live during the event, you’ll get to keep all of the mods and profile icons you’ve achieved! Sign in, earn your rewards, and enjoy the celebration!

We hope you enjoy the Age of Empires II: Definitive Edition New Year Celebration!  Again, don’t forget to sign into Xbox Live to ensure you keep everything you unlock!

“Rise from a mere duchy to the marvel of Western Europe through economic might, cultural achievement, and the use of advanced military technology and tactics.”

The Burgundians are a new cavalry civilization specializing in economic development. Take advantage of their ability to perform economic upgrades one Age earlier than other civilizations, cheaper stable technologies, and more powerful gunpowder units to dominate your opponents on the battlefield.

Click below to see the different tools the Burgundians bring to the battlefield!

Coustillier: Burgundian cavalry unit that utilizes a powerful shock attack when charging into battle. Strong vs. infantry and archers. Weak vs. Camel Riders and Monks.

Burgundian Vineyards: Convert all food into gold at a 2:1 ratio; Farmers slowly generate gold in addition to food.

Exclusive to Lords of the West

“Experience the diverse cultures and martial spirit of the Mediterranean’s crossroads as you build one of the most coveted kingdoms of medieval Europe.”

The Sicilians are an infantry civilization specializing in city building to fuel their relentless drive for expansion. Build Donjons for additional fortifications around your towns, employ the First Crusade technology to spawn batches of the unique Serjeant unit in all Town Centers, and utilize the Scutage technology to refill you and your team members’ battle coffers with 15 gold for each military unit you own.

Click below to see the different tools the Sicilians bring to the battlefield!

Serjeant: A hardy infantry unit which can also construct Donjons.

Donjon: Unique fortification used to train Serjeants. Units can garrison in the building for protection; Archers and Villagers shoot additional projectiles when garrisoned. (Note: The building is considered a Tower, and thus does not count towards the building requirements to Age Up.)

First Crusade: Upon researching, each Town Center (up to 5) spawns a one-time group of 10 Serjeants.

Scutage: Upon researching, each team member receives a one-time payment of 15 gold for each military unit that they own.

Exclusive to Lords of the West

Several UI improvements have been made to the Battle Royale mode:

Fixed an issue where the Heated Shot upgrade would not affect secondary arrows fired from Castles and Towers.

The following civilizations no longer have access to the

Konnik (Dismounted) [Standard & Elite]: No longer has more line of sight than the mounted Konnik.

Atheism: No longer reduces the research cost of

Treason, but now also reduces the enemy gold income from Relics by 50%.

Reduced the price reduction of

The civilization now also receives a 33% discount for all

Can now research the

Team Bonus: Increased the bonus attack granted to Foot Archers vs. buildings from +1 ▶ +2.

Additional Town Center sheep now only spawn from newly-constructed Town Centers, and only after advancing to the

Five brand-new maps have been added to the map pool:

In addition to these changes, here’s the last update worth noting for Battle Royale maps:

The following attributes can now be modified:

This can be done in the following methods and places:

Fixed a legacy issue where recorded games of a scenario using any of the following triggers would desync: 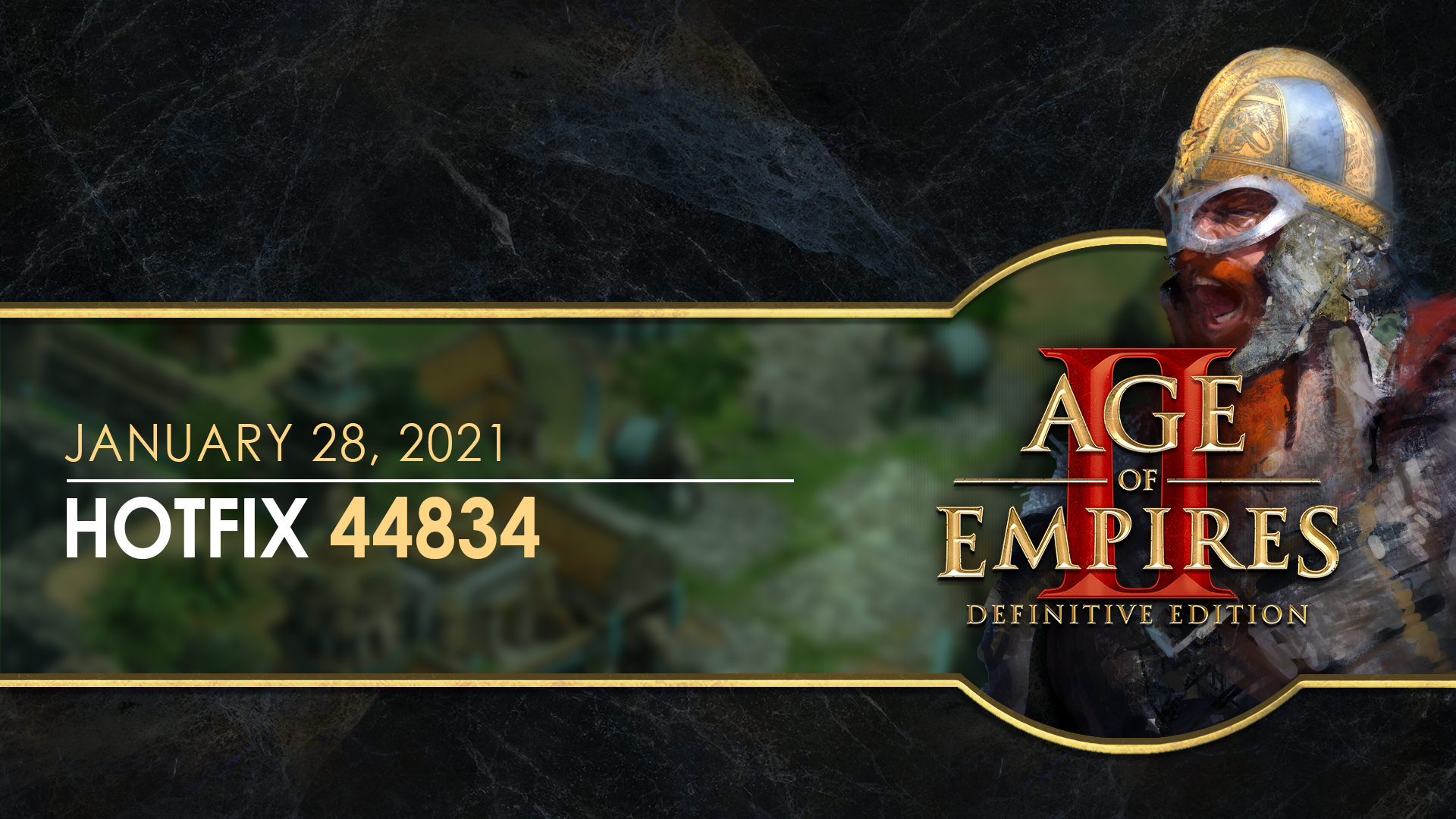 Today’s (January 28) hotfix introduces a handful of solutions for some of the gameplay issues that cropped up with the January update, while work continues on other bugs you’ve reported—including specific crashes that some users are experiencing. Here’s the list of changes:

If you continue to experience any crashes, performance issues, or technical hiccups in the game, please take the time to reach out to the support team so they can assist you.

Crashes are the primary focus of our ongoing investigation, as well as performance issues noted by a subset of players. For those experiencing them, the most important thing you can do is contact our support team: both for assistance and to provide details that will help our team understand the problem.

We are also tracking and working on fixes for several other game issues identified by the community over the past week. For issues which have been verified, keep an eye on the Known Issues page for updates; and if you encounter a new problem that is not listed, please check the official forum to contribute to a discussion thread if one already exists, or start a new one if (and only if) it does not.