After a break for the holidays, Age of Esports is BACK with an overview of upcoming tournaments and a recap the last few events! So, grab your favorite Red Bull and buckle up as we take a peek at what’s happening in esports!

This month, we’re shining the spotlight on the thrilling return of a fan-favorite event, as well as several community tournaments that everyone can enjoy! Whether you’re looking for masked marvels battling from behind secret pseudonyms, a brand-new German tournament looking to crown a champion, or exceptionally weird-and-wacky team games, there’s a wonderfully creative and action-packed tournament waiting for you!

Hidden Cup is back and bigger than ever! February will host the qualification stage: when 64 expert players compete for their chance to join the top eight from Hidden Cup 3. Finals will be broadcast March 18th-21st in a single weekend to maximize the action!

Featuring all-new heroes, maps, settings, and an even larger prize pool, this event promises to grow above and beyond Hidden Cup 3—continuing to build on the success of the Age of Empires II: Definitive Edition tournament scene in 2020!

The 2021 German Championship is a fast-paced event: spanning a two week, action-packed period. The top four players have been invited directly to the main event, while 16 other challengers will compete in a single-elimination bracket to determine the remaining four finalists. Who shall rise as the new champion?

The main event kicks off this weekend with a single-elimination bracket of the top 8 players, all of whom will be competing for their share of the €3,000 prize pool and the title of the 2021 Age of Empires 2: Definitive Edition German Championship!

Age of Empires II: Definitive Edition is expanding…and so is the circus! Hosted by JonSlow, the Master of Socotra tournament kicks off the new year with more high-level, competitive, AoE II: DE-clowning!

Masters of Socotra is the first top-tier, 1v1 tournament taking place since the release of the Lords of the West expansion, and features some of the world’s finest players. It is also the first non-Arena tournament hosted by JonSlow, who is (perhaps) best known for last year’s wildly successful Clown Cup 3.

At first glance, Socotra might seem all that Arena is not: an open map with close spawn points that pit players against each other from minute one. But Socotra allows for out-of-the-box strategies, crazy gameplay, and clownish shenanigans. You can expect castle drops, early lames, unexpected unit choices, insane villager wars, and more from top players—including Red Bull Wololo 3’s winner, DauT, and other pros such as TheViper, Hera, and ACCM.

The main event features a single-elimination bracket with 16 players. While the top 8 sign-ups were seeded directly into the main event, the remaining 55 players will battle through the qualifiers to find the final 8 players. Who will be the first to become the Master of Socotra and claim the lion’s share of a +$1,000 prize pool?

The Delirium Cup is a unique tournament with one key concept: home maps have specific victory conditions attached to them! This means that when a home map is picked, you’re also picking a game mode—Random Map or Empire Wars—and one or more victory conditions—including Regicide, King of the Hill, Sudden Death, or Capture the Relic.

The main goal of this 3v3 tournament is to present a variety of formats, each of which will force teams to adapt and evolve their strategy to emerge victorious!

Welcome, ladies and gentlemen, to the first-ever, large-scale, competitive singles tournament of the Age of Empires III:Definitive Edition era!

The $1000 ESOC Challenge Cup will be a cut-throat event held in the month of February, where the top 16, highest-rated players on the 1v1 Supremacy Elo leaderboard will come together to fight for the crown. These top players will be seeded into a Group Stage: 4 groups with 4 players in each group. From there, it’ll be a three week onslaught with only one player advancing from each group.

The Semi-Finals and Finals will take place over a single, stacked weekend bash at the end of the month, with 80% of the prize pool on the line. Not for the faint of heart, this event is a proving ground for true competitors!

December and January were dominated by two major events: the 2v2 World Cup 2020, and Red Bull Wololo III. Here is the rundown of the events and their outcomes! (SPOILERS AHEAD)

The third edition of Red Bull Wololo has come to a close after two gripping weekends FULL of exceptional Empire Wars action and surprising results! Over 500 players worked tirelessly to qualify and earn rewards along the way, but only one could rise to the top!

Coming out of the group stage, we had four qualifying players—DauT, Vinchester, ACCM, and Villese—joining four returning semi-finalists from Red Bull Wololo II: Mr_Yo, Liereyy, Hera, and TheViper. With the final eight players set, no one could have predicted what happened next…

At the end of the Round of Eight (RO8), three of the qualifying players would earn their spot in the semi-finals over the invited veterans. The returning Red Bull Wololo I champion, Mr_Yo, would fall in a 3-1 set to long-time Age veteran, DauT. ACCM would beat Vinchester in their RO8 set, and Villese would join them after a victory over TheViper in a tough-fought contest that ran late into the night. Liereyy—the returning Red Bull Wololo II champion—would be the only invited player to move on to the finals after a hard-fought set with Hera.

On day two of the finals weekend, Liereyy and DauT would battle their way to a 3-1 victory over their opponents to secure the top two placement in the grand finals. DauT, who has been a regular force in the competitive scene for the last 19 years, would be taking on one of the youngest competitors, Liereyy, who would be seeking a back-to-back victory after winning Red Bull Wololo II in 2020.

The final day would see a dramatic series of games. Each player would alternatively take the lead in the series before Liereyy took a threatening 3-2 lead in the set—one game from a BO7 vicotry. It would take some out-of-the-box civilization picks, a flood of Cavalry Archers, and masterful tactical play from DauT to secure the final two games, winning 4-3 and toppling the returning champion to earn the crown. The 2v2 World Cup, which begin in November, has finally reached its epic finale. Featuring teams from nations around the globe, the tournament saw amazing games from start to finish .

The settings of the tournament pitted the A and B teams of each nation against each other in the Round of 16, which had little surprises as team A comfortably dispatched their secondary counterparts. Russia defeating Germany A was the most unexpected, following Germany’s come-from-behind victory over Argentina A in the group stage.

During the Grand Finals, Norway versus China (TheViper and MbL vs Mr_Yo and Lyx) was an exceptionally heated match: with the unbreakable defense of Norway facing the unstoppable aggression from China. In the end, Lyx‘s nonstop harassment of the Norweigians allowed Mr_Yo to build up an incredible economy and take the series!

Congratulations to Lyx, and Mr_Yo on their victory! 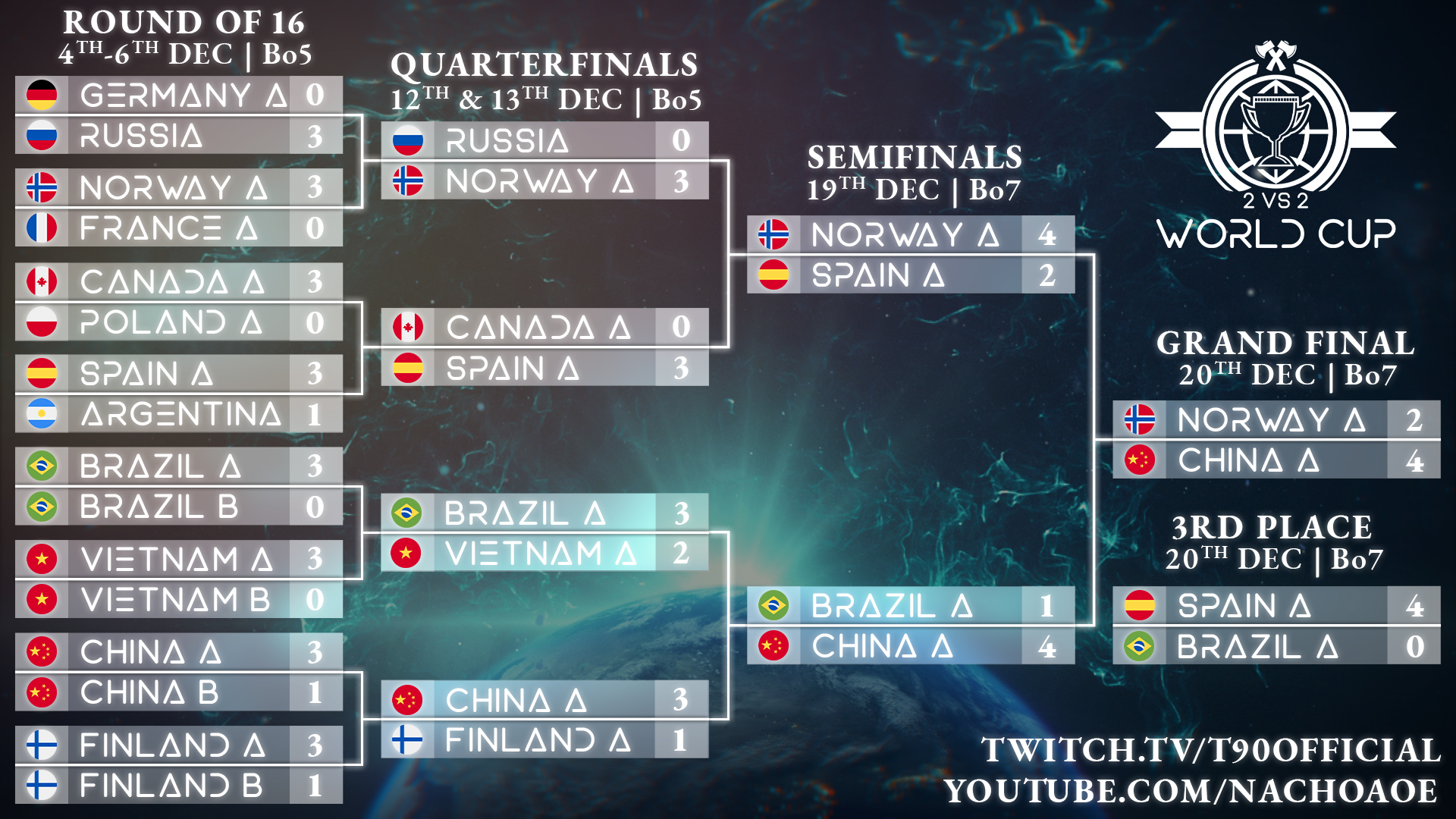