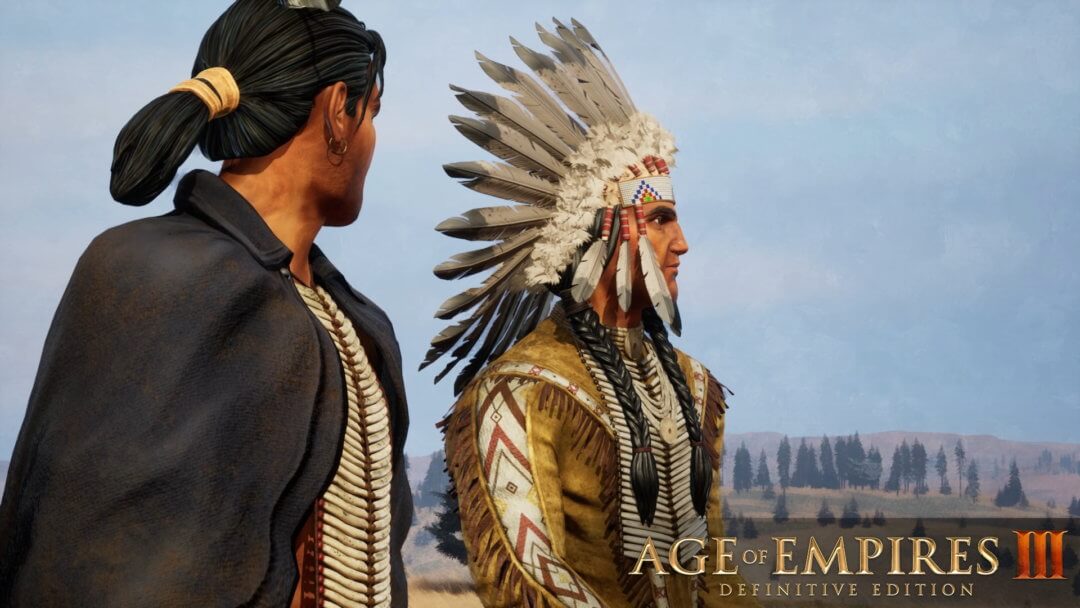 Chayton Black and his Lakota uncle survey the plains in a cinematic from AoE III: DE

With less than a month until the arrival of Age of Empires III: Definitive Edition, we’re taking a closer look at the changes coming to the ‘Shadow’ storyline while introducing you to the voice behind its newest character: Uncle Warbonnet!

The historical personage of Crazy Horse—a leader of the Oglala band of the Lakota who died in 1877—originally appeared as a character in the Age of Empires III expansion, The WarChiefs. After feedback from our Indigenous consultants, we recognized the need to remove this revered figure from the narrative and replace him with a fictitious character invented by the lead writer of the new ‘Shadow’ storyline: Anthony Brave. In Anthony’s own words:

“I think a game can have Crazy Horse in it, but it has to be done right: with great care, thought, and research from the beginning…not just in how he is represented, but also with the kind of context the game creates. In this case, it just didn’t seem very dignifying for someone of his standing. I would also add that if you wanted to depict Crazy Horse, you should reach out to his maternal family to get permission.”

The character Anthony came up with to replace Crazy Horse is Uncle Warbonnet: the uncle of the ‘Shadow’ storyline’s hero—Chayton Black. Chayton is the son of Amelia Black (the protagonist of AoE III: DE’s ‘Steel’ campaign) and Uncle Warbonnet’s late brother. Raised on the east coast of North America, Chayton is seeking out his Lakota relatives when the story begins. Finding them alters his life forever—though you’ll have to play the new ‘Shadow’ campaign to discover exactly how…

HISTORICAL FACT: The warbonnet was a headdress worn only by a warrior who had shown great courage in battle, and was worn as a symbol of his high standing in his band. 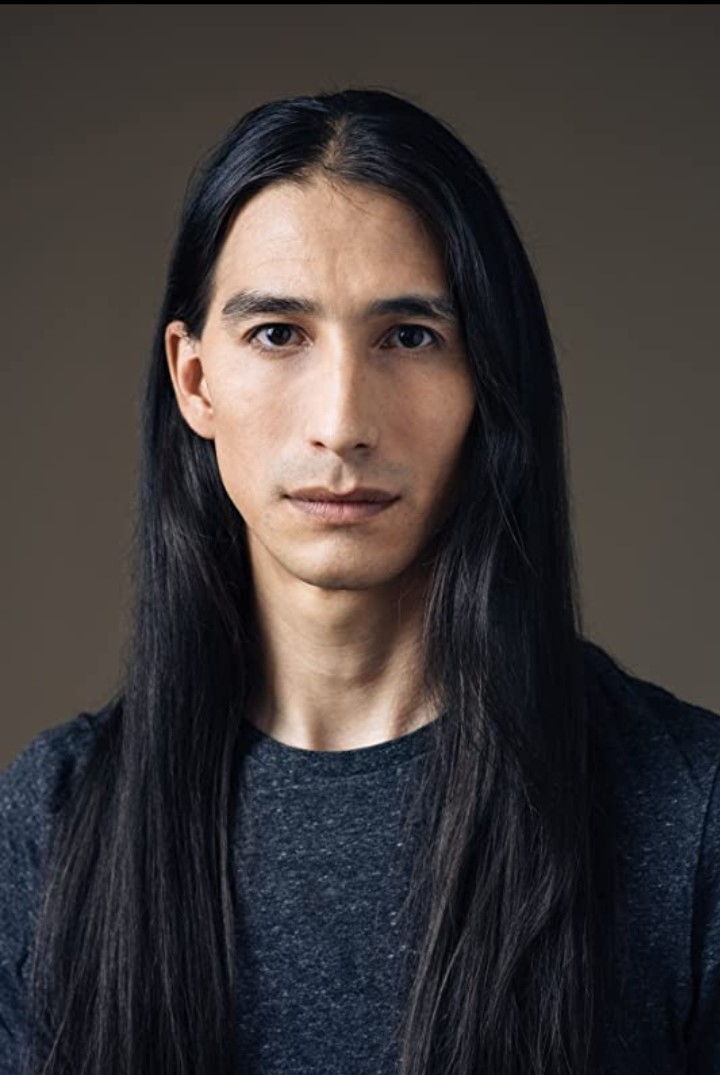 Tokala Black Elk is an actor (Yellowstone), voice-over artist (The Revenant and Westworld), and an activist who has appeared before Congress to represent the Lakota Nation. He is also a certified teacher of the Lakota language, and now adds the role of Uncle Warbonnet (aka Uncle Frank) to his resume—a brand-new character appearing in the reworked ‘Shadow’ storyline of Age of Empires III: DE.

WORLD’S EDGE: Hi Tokala! Where are you from?
TOKALA BLACK ELK: I grew up on the Pine Ridge Indian Reservation in the southwest corner of South Dakota. I am a member of the Oglala Sioux Tribe, though our name for ourselves is Lakota.

WORLD’S EDGE: What does Tokala mean and what is the history behind your name?
TOKALA BLACK ELK: Tokala has 3 meanings.

First, it is the Lakota name for the smallest Fox in North America—the Kit Fox.

Second, we had a Warrior Society named for these little foxes; it was said that they used to pack up like wolves and could defeat a black bear when working together.

WORLD’S EDGE: How did you get your start in acting?
TOKALA BLACK ELK: By complete accident. I drove someone else to an open casting, but my car AC had just died whilst it was about 104°F [40°C], so I decided to wait in the air-conditioned waiting area. When I went inside, the Casting Director said, “You’re next,” and pushed me into a room with the Director. I had no sides [a.k.a. the audition script], no resume, nothing…but I ad-libbed and was cast in the role of a villain.

WORLD’S EDGE: What is your dream role in a movie?
TOKALA BLACK ELK: I don’t have one… I do have an acting dream, though. I’d like to wear pants in several films in a row. Movie breachcloths are always made by Costumers rather than an actual guy wearing the thing. I wear a lot of leggings and breachcloths for period films, but when I get to wear pants I’m either portraying a modern person, someone in the future, or someone from a different world, altogether. (I have no problem wearing leggings and a breachcloth; I just think I can also act with pants on.)

WORLD’S EDGE: Is there a historical Native American figure you would want to play?
TOKALA BLACK ELK: Several. There are so many amazing stories about Natives that Hollywood has not tapped. There are World War 2 soldiers that changed the outcome of many battles—and maybe even the war itself. The majority of those have not had their stories set to the big screen or television.

I also always wanted to play “American Horse,” because that guy had style with his trench coat, sideways hat, six-shooters, and giant warhorse.

WORLD’S EDGE: Have you ever known someone like Uncle Warbonnet?
TOKALA BLACK ELK: I based his voice and demeanor on my late great-uncle, Thomas Black Elk. So, I suppose yes, I have!

WORLD’S EDGE: Could you tell us about the nuances of the Lakota language?
TOKALA BLACK ELK: Lakota is a tonal language: so if your tone is different, it changes the meaning of the words. It is also its own base language…think of it as if Italian was still Latin and people could make up words about things they never saw before—and because it’s a root word language, other speakers will understand even though that word never existed before. Lakota conjugation is inside the word, and this makes it difficult for English speakers to learn.

WORLD’S EDGE: You represented the Lakota Nation in Congress in an effort to change the name of the Custer Battlefield. What do the Lakota think it should be called, and why?
TOKALA BLACK ELK: I was 13. I was supposed to be learning how to be a leader, so I was sent to watch members of the Oglala Sioux Tribe executive branch testify before Congress. I had to take a 5am flight while everyone else was on one at 10am; but at 7am, a blizzard shut down all the airports—I was the only one of my people that made it to Washington D.C. So, I was given clearance by my tribe to represent us and told the stance of my people over the phone. That evening, I told Congress that my people were the victors of the fight in question and that the victors historically name the battles. Congress wanted to change the name from “Custer’s Last Stand” to “The Battle of Little Bighorn.” That is the Crow name for it—the Crow were scouts for the USA, fighting alongside Custer. Lakota called the event, “The Battle of The Greasy Grass.”

WORLD’S EDGE: Do you have a favorite videogame?
TOKALA BLACK ELK: I’m old-school; I put so many quarters into the PAC-MAN and Asteroids machines as a kid…I probably could have bought several consoles instead. Those two tie out of sentiment.

But modern games are also amazing; they’re becoming more and more real looking every year. I love how strategy games expand a chess board into a real-looking world. I spent many hours playing the original Age of Empires and Starcraft. I consider those classics favorites, as well…thus, I am extremely honored to be able to say that I’m a voice actor in a sequel to one of my all-time favorite games.

World’s Edge sends out a huge thanks to Tokala Black Elk for answering our questions and being a key part of this project! Remember to pre-order Age of Empires III: Definitive Edition so you can meet Uncle Warbonnet this October! 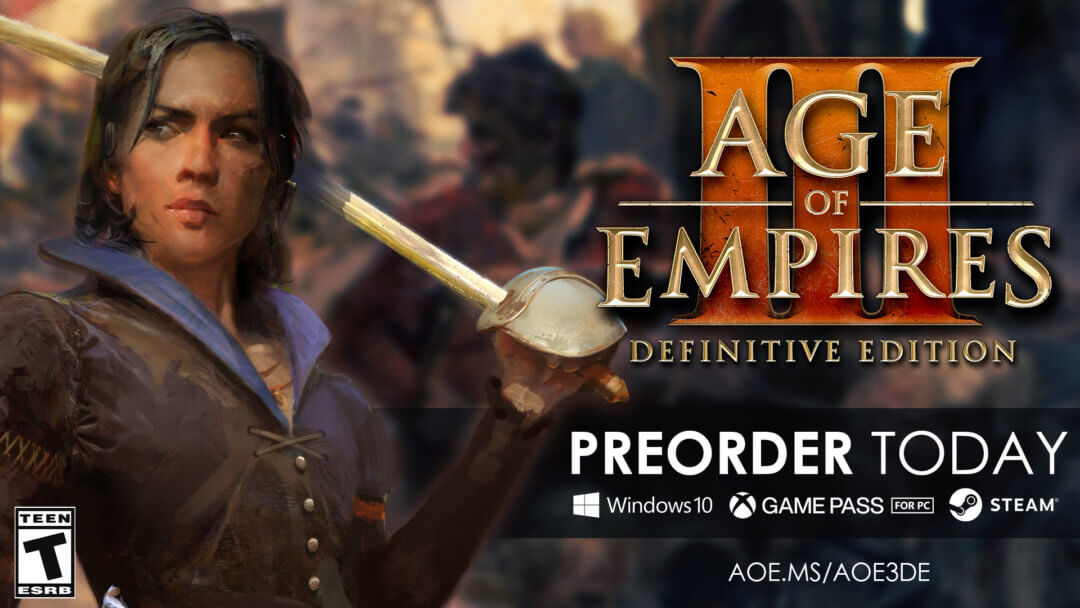 Age of Empires 2020 in Review: with Shannon Loftis

Stay Cozy with the Age of Empires Winter Sale!