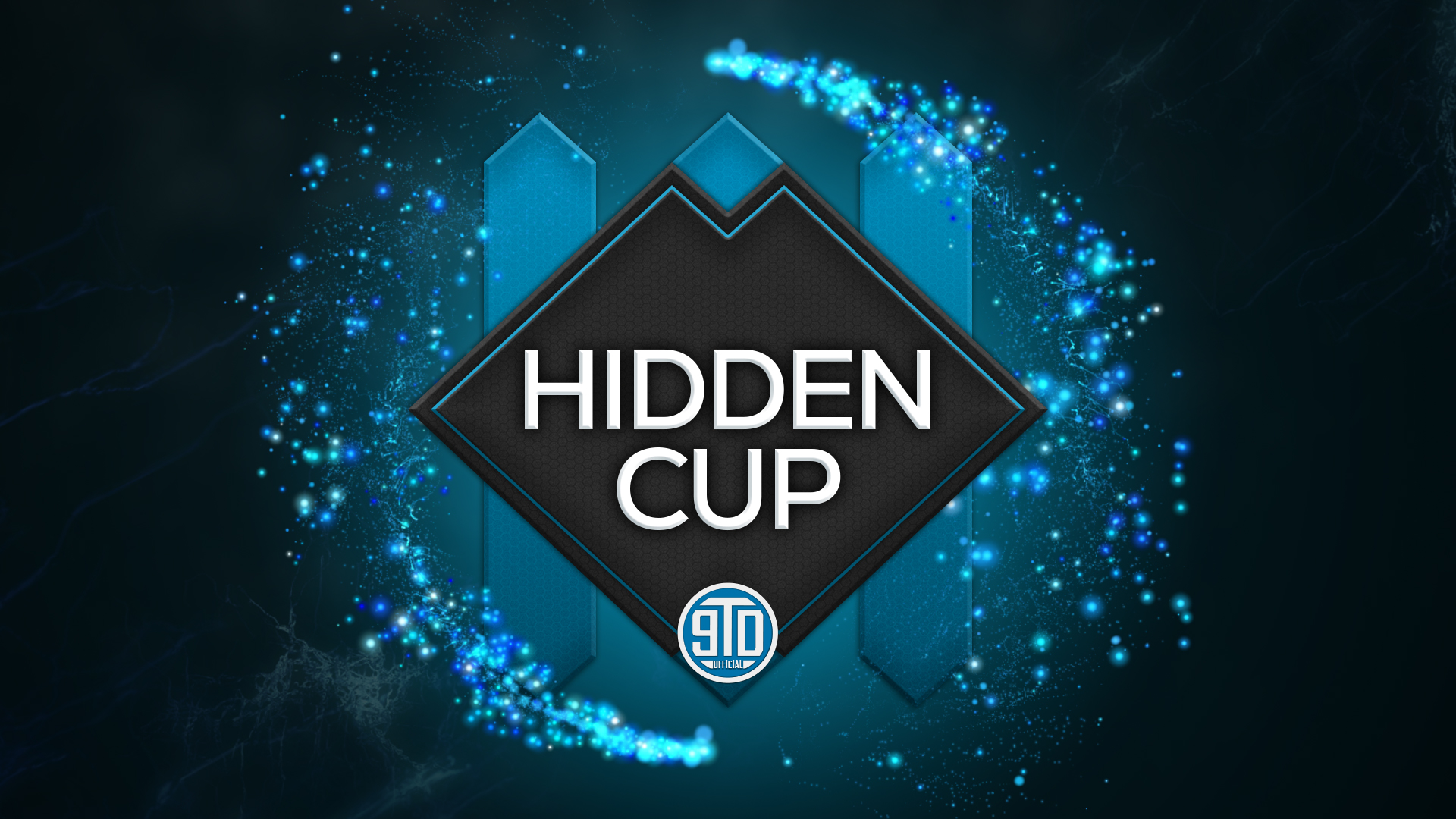 After a successful and already record-breaking second edition, there was no doubt Hidden Cup 3 was going to return. When it was announced, at the conclusion of the epic final of the third installment of Nili’s Apartment Cup, it became a reality. After an excruciating few weeks of waiting, and an exciting qualifying event, casual viewers and hardcore players alike could not have been more hyped than by the promise of the four full days of high-quality games offered by Hidden Cup 3.

The concept of Hidden Cup is as simple as it is fascinating. Sixteen players, hidden behind popular hero names picked from the new expansions and the classic campaigns, battle it out in a single elimination bracket until one emerges victorious. Contrary to most high-level tournaments, the bracket is not seeded: the highest rated player could possibly face their most serious rival in the first round, forcing the players to be on alert from the very first game and try their hardest.

Aside from the obvious benefit of rooting for your favorite hero – and the brackets had some epic names, such as Charlemagne, Princess Yodit, William the Conqueror and, a fan-favorite, Emperor in a Barrel, the beauty of hidden identities is that the incredible skill of all players is put on display. While the top players are all well-known, those who do not stream their point of view as often tend to fly under the radar. And what a stunning display Hidden Cup 3 was! 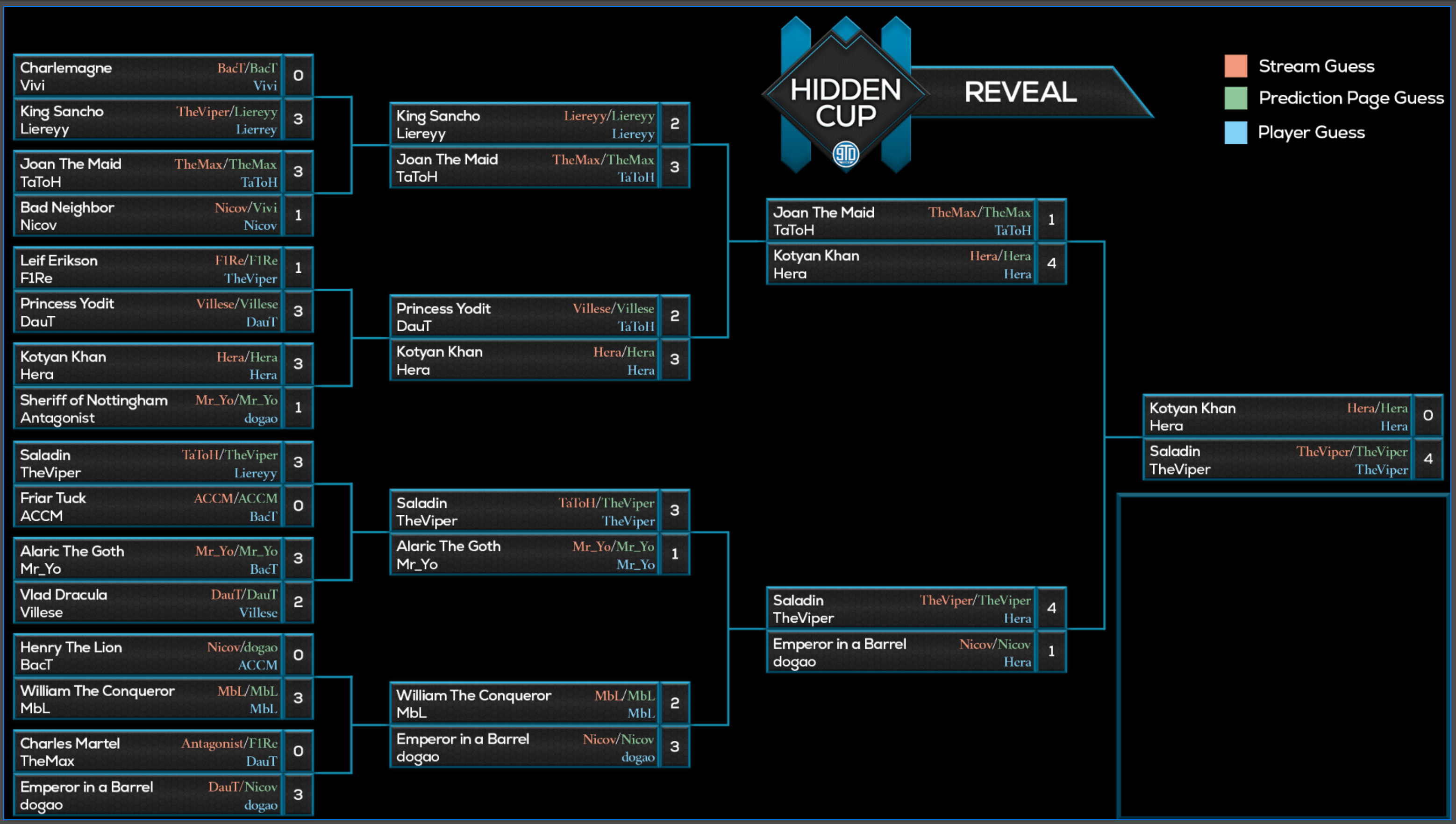 The highest level of play ever?

The first day showcased the incredible resilience of the Sheriff of Nottingham, later revealed as Antagonist, a relatively new top player from Spain. Opposed to Kotyan Khan – Hera, who would go on to reach the finals – Antagonist showed all his class when he took a win of epic proportions in a game that went well over an hour. This was followed, on day two, by the superb match between the well-established Mr Yo (as Alaric the Goth) and the rising star Villese (as Vlad Dracula), a five-game set that Mr Yo eventually won – barely.

Day three will remain in every viewer’s memory as one of the best days for the game, as eight players offered more than twelve hours of entertainment, battling it out to the bitter end in four grueling series. The creative TaToH got the best of Liereyy in a tantalizing set while the ageless veteran DauT narrowly lost an equally gripping match to Liereyy’s teammate, Hera. On the other side of the bracket, it was a classic, in TheViper against Mr Yo, where TheViper emerged victorious in four games. Finally, it was the Brazilian star dogao who reached the semi-finals, after a hard-fought victory over MbL.

The final day would feature two main storylines: Hera consolidating his claim at being the most serious contender to TheViper’s throne, and TheViper himself cementing his status as probably the best to have ever played the game. Hera reached his sixth final of the year after beating TaToH and challenged TheViper who edged out dogao. TheViper’s performance in the final was near flawless: a clinical display of his incredible mechanical skills and tactics that enabled him to take a clean-sweep victory against Hera, winning Hidden Cup for the third time in a row.

Hopes were high after Nili’s Apartment Cup 3 shattered the previous viewership record for Age of Empires II with just over 27,000 concurrent viewers on the final day.

This number was reached within the first match. Less than two hours after starting, Hidden Cup 3 broke 30,000 viewers, the most ever for any Age of Empires II event. Day 1 peaked at 37,920 concurrent viewers.

Day 2 continued on the same trend, but it was not until day 3 that new milestones were met. First 40,000 and later 45,000 viewers watched the prime-time action on Saturday, with more people than ever before tuning in to enjoy some of the highest-level competitive Age of Empires games ever played.

The final day continued this upward trend, eventually breaking the 50,000 viewers threshold on the final game of the final set shortly before Hera capitulated to TheViper’s relentless plays. With the already historical Hidden Cup 3, T90 sets a new record for Age of Empires with a maximum of 51,649 viewers tuning in to watch the final.

One of the characteristic features of Hidden Cup is the introduction of interesting new maps, opening a ton of new tactical choices for the players and enabling the best strategists among them to come up with clever plays, outsmarting opponents who would be mechanically more talented. In addition to Bay and Cup, two maps returning from Hidden Cup 2 and provided outstanding games, AlgernonR and HenkDeSuperNerd came up with two new maps: Slopes and High Tide.

Slopes is set in an open valley with two elevated corridors on both sides, rich with huntable animals and shore fish. Playing to the strengths of the Indians, the map saw dynamic games – some short, and some very long – and an array of different approaches.

High Tide focuses more on water, featuring a two-layer pond with a vast shallow area preceding a deep-water area. Players fight on land, and on water, trying to secure valuable fishing grounds and a central island rich in gold mines.

Finally, the team behind the exceptional spectating program CaptureAge worked hard to provide T90 with a brand-new overlay specifically designed to offer the best casting experience for Age of Empires II: Definitive Edition. The overlay, clear and elegant, displays military and civilian numbers from both players, currently banked resources and completed upgrades, enabling the caster to accurately assess the advantages of each player’s position.

After such an incredible event, viewers are left with only one question: when will high-level tournaments return? The resounding success of Hidden Cup 3 proves our beloved game has never been healthier. With the highest prize pool for a 1v1 event since 2001, a record-breaking viewership rivalling well-established esports and such incredibly talented players, the competitive scene for Age of Empires II has a lot more room to continue growing for the years to come.

Did you miss the event? Don’t worry! You can find all the footage of every great attack, boar theft, and castle take down over on the Hidden Cup 3 Youtube Playlist.