King of the Desert 3: The Final Weekend!

After five weeks of incredible action, King of the Desert 3 is entering its final weekend! The $50,000 USD Arabia-only tournament has provided some of the highest-level competition Age of Empires II: Definitive Edition has to offer. Stacked with the best 64 players in the world playing on the most popular map, it’s already produced many memorable moments!

This blog contains spoilers for King of the Desert 3.
If you’ve missed any of the action, watch the recordings HERE!

A fair share of surprises contributed to much of the suspense during the event thus far! Early on, several high seeded, well-known players did not make the group stage: including LaaaaN, ACCM, and Capoch. Then, the top four seeded players ended on the same side of the quarterfinal bracket after Mr_Yo and Liereyy failed to win their groups—forcing matchups against TheViper and Hera in the quarterfinals. This lead to an early exit for Hera (2-3) against Liereyy, and the reigning, two-time KotD champion, TheViper, being eliminated (0-3) by Mr_Yo.

KotD3 has also seen some impressive breakthrough performances! Japanese player, chart—who seeded 46 at the start of the tournament—managed to defeat several seasoned pros to reach the group stage, where he finished in the top 12. Villese also reached his first semifinal in a major event, and now has a shot at the crown after securing several top 8 and top 16 performances in recent years.

While many burning questions about KotD3 have already been answered, the most important one still lies in the games ahead: Villese, MbL4OC, Mr_Yo, and Liereyy are prepared to battle with all their might in the semifinals, and for the chance to be the one “King of the Desert”!

Villese has had a solid performance since the start of KotD3. In the group stage, he won 3-0 against both Tatoh and Vivi, who were considered favorites in their matches. His only defeat came at the hands of Hera (1-3). In the quarterfinal, he bested veteran legend, _Daut_, to solidify his best tournament run to date!

During the semifinal, Villese will face off against MbL40C—widely considered one of the best Arabia experts in the world. MbL40C had no difficulty reaching the group stage, where he defeated Mr_Yo in a first-place decider in Group D. While facing off in the quarterfinal, MbL40C won a solid 3-0 against dogao, becoming the only undefeated player to reach this stage of the tournament!

Liereyy—a two-time runner up in KotD and recent Red Bull Wololo 2 champion—entered KotD3 as one of the fan favorites to win the tournament. His path to the semifinals was not without obstacles, as he lost to _Daut_ (2-3) for first place in Group C. This meant he had to face Nicov and Hera to make it to the final four, which he ultimately delivered! Emerging victorious, Liereyy swept Nicov 3-0, then battled ferociously versus Hera in a five-game showdown for the 3-2 win.

Similar to Liereyy, Mr_Yo lost a first-place decider match against MbL40C in Group D. This meant he had to defeat chart and the reigning champion, TheViper, to reach the semifinals. He, too, was up for the brutal task set before him: winning both matches in a 3-0 landslide! His victory against TheViper has already brought about a new era for the KotD series: establishing that this year, for sure, will have a newly crowned champion! 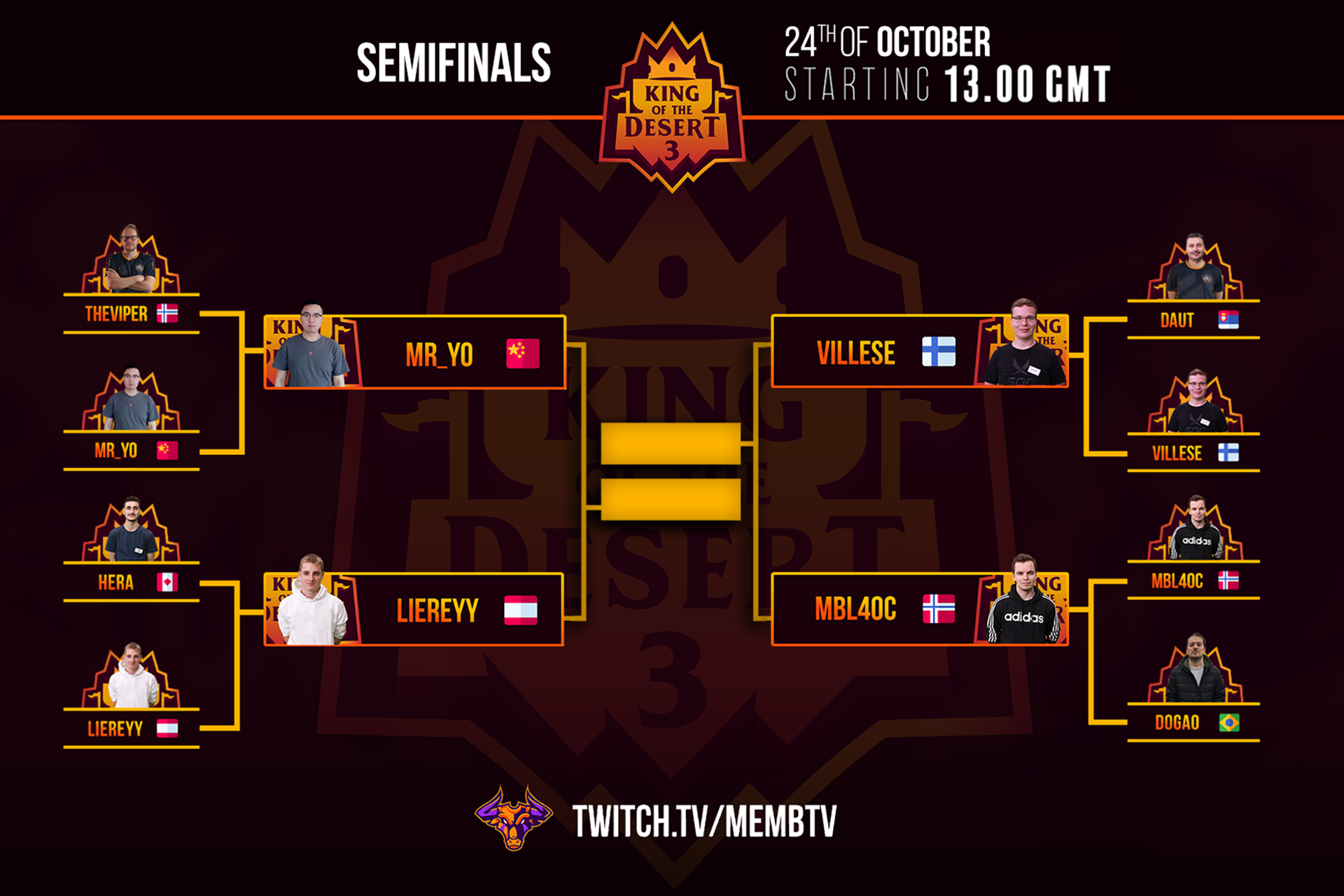 Own a piece of history during the Age of Empires Autumn Sale!