Join us for the World Cup 2020 Finals LIVE this Weekend!

Over 193 teams from 57 nations joined the 2v2 World Cup tournament; now, after several weeks of intense matches, the best players in the world will face off in some of the most exciting team-games of the year!

The final four teams battling for the crown—Norway, Spain, Brazil A, and China A—faced a path full of adversity to make it this far, but their greatest tests still lie ahead.

Norway (TheViper & MBL) played against Vietnam B and the Czech Republic in the group stage. They faced a tough Vietnam B squad who fought all the way to the final game, where Norway emerged with a 3-2 victory. They then faced France and Russia in the Round of 16 and Quarterfinals, but their biggest test comes this Saturday when they face Spain (TaToH & LaaaaaN) in the Semifinal.

Spain (TaToH & LaaaaaN) emerged from their group after battling China B and Argentina B. They eliminated Argentina A in the Round-of-16 and faced a tough matchup against Canada at the Quarterfinals. Spain’s teamwork and strategy pushed them through to the Semifinal, where they face Norway. GamerLegion teammates, Viper and TaToH, will be on opposite sides in this matchup.
Brazil A (Dogao, Miguel & FeAge) met Turkey and Finland B in the group stage. Brazil A beat the crowd favorite, Finland B, and their unconventional strategies in a 3-1 set to advance. They then eliminated their compatriots, Brazil B, in the Round of 16 before facing Vietnam A (the 2018 World Cup Semifinalists) in the Quarterfinals—winning the tournament’s (arguably) most entertaining series yet with a 3-2 score.
China A (Mr_Yo & Lyx) round out the semifinalist group of this year’s 2v2 World Cup. They claimed second place in the 2018 2v2 World Cup, and look ready to emulate—if not improve—their run this year. They defeated France and Ukraine in their group. They faced their compatriots, China B, in the Round of 16, and eliminated the 2018 World Cup winners, Finland A, in the Quarterfinals by a score of 3-1—a repeat matchup straight 2018 Finals.

The Best is Yet to Come

The semifinals (Norway vs Spain, Brazil vs China) will take place this Saturday, December 19. The losing teams will wrap up their tournament during the third-place consolation match on Sunday, December 20, followed immediately by the Grand Finals. Each matchup will be decided in a best-of-7 series. 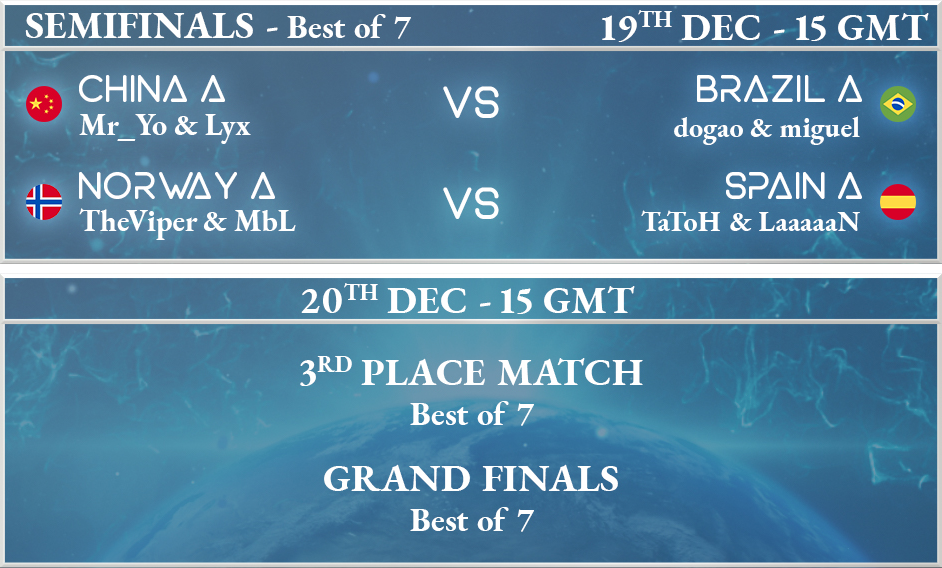 All four teams will face their greatest challenges over this weekend, and each player must perform to the peak of their skill in order to win. The opponents will be ready to punish any mistake, and none of the teams want to go home with any medal less than gold.

Tune in THIS WEEKEND (December 19th and 20th) on T90Official’s or NachoAoE’s streams to cheer for your favorite players as the final four teams fight for the 2020 World Cup crown and their share of the $30,000 prize pool! You won’t want to miss a moment of the action!